Because of the length and richness of Dr. Timothy Trumper’s answers, his interview is being posted in six parts. If you are interested in deepening your understanding of the doctrine of adoption significantly, you will want to take the necessary time to carefully read his answers.

In part 4 Tim addresses what I believe is a very important issue. Many who preach, teach, or write about theological adoption combine John’s new birth model of entrance into God’s family with Paul’s adoption model. This is unfortunate for a number of reasons, one being that it prevents us from recognizing the full significance of Paul’s doctrine of adoption.  So let me encourage you to take a few minutes to read this part of my interview with Dr. Trumper.

4. What is the difference between the apostle John’s model of entrance into God’s family and Paul’s? Why do you believe it is important to distinguish them?

Good question! The first thing to say is that these differences are not absolute. Both authors have in mind the same Father. That is to say, the Fatherhood of God is common to the models of new birth and adoption. Both authors make use of the term “children of God” (Jn. 1:12; 11:52; 1 Jn. 3:1, 2, 10, 5:2; Rom. 8:16; Phil. 2:15). Both authors use the language as part of their chosen metaphorical constructs: John the new birth, and Paul adoption.

Nonetheless, there are sufficient differences between the two models to warrant their disentanglement. This disentanglement is necessary not only for the clear perception of the structure and content of Paul’s model, but also of John’s.

In John’s model, for example, there is no use of huiothesia. The closest he comes to a doctrine of adoption is in his use of exousia (“authority” or “right”) in John 1:12. But even supposing John makes reference there to adoption, we have no right to assume that there is immediate coherence between John’s language and Paul’s. Why not? 1. John’s reference constitutes a metaphor (a one-time analogy), Paul’s constitute a model (capable of conveying a substantial body of information). (2) John and Paul were coming from different backgrounds and writing for different audiences. (3) The meaning of the Johannine and Pauline terminology is governed not simply by the words used (inclusive of their origin), but by the context of their use. Accordingly, we must understand John’s allusion to adoption — if, indeed, that is what it is — within the context of the Johannine writings before making any comparisons or contrasts with Paul’s thought.

Second, whereas Paul speaks predominantly of Christians as the “sons of God”, John speaks of us chiefly as “children”. Paul’s approach is governed by the thought that at the heart of the adoption is a union between the natural Son and the adopted sons (n.b. the play on words: huios [son] and huioi [sons, as in huiothesia]). John’s approach is governed by the thought that there is only one Son — the only begotten Son (huios) — by contrast with whom we are but “children” (tekna). But the term tekna, which comes from the root tiktein (to bear), also indicates, in distinction from huiothesia, that the filial relationship is constituted by birth. The idea of birth connotes the idea of regeneration and conveys chiefly the idea of similarity of nature.

Yet, I stress, these differences are not absolute. Sometimes Paul describes God’s people as children (tekna [Rom. 8:16, 17, 21; 9:8]), and sometimes John implies the status of the children of God (1 Jn. 3:1). Similarities such as these do not negate, however, the case for desisting from the conflation of the two images. For these similarities are explicable within the confines of the thought/models of the respective authors. 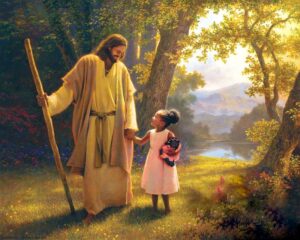 There are a number of plausible reasons for Paul’s use of the term tekna: 1. To underline the theological rather than sexist motivation behind his connection of the “Son” and the “sons”. Note in this regard Paul’s reference to the daughters of God (2 Cor. 6:18) and his use of tekna. 2. To underline the fact that, although, in the NT era, the sons of God are of age, they nevertheless remain children. Think about that. Our Father in heaven is the Ancient of Days, who neither ages nor suffers loss of vitality. Accordingly, there occurs within his family no role reversal, for at no point does he become dependant on his sons and daughters. No matter how mature believers are in the new covenant era, they always remain but children, and relate to God as such.

Please don’t think of all this as esoteric hair-splitting. The careful analysis of the wording of Scripture comports with a verbal and plenary understanding of its inspiration, and is essential for the accurate understanding not only of the distinctive structures of each model, but of the doctrines they convey (chiefly union with Christ and regeneration). This sort of analysis also paves the way for a fresh approach to the systematizing of biblical truth. Naturally, in speaking holistically of the Christian faith and of the doctrine of salvation in particular, there is need to connect the doctrines of Scripture. Yet the interconnectedness of the biblical doctrines must be established on Scripture’s own terms; by which I refer to the need to desist from the mixing of the models of Scripture unless they are clearly mixed within given contexts of Scripture. In making this point, I realize its far-reaching implications for the discipline of systematic theology. We must not allow, however, a fear of methodological adjustment to blind us to the specifics of the biblical data.