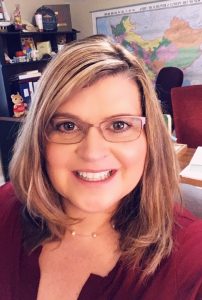 Job Title: Executive Director
Email Address: dana@nightlight.org
Favorite Bible Verse: Philippians 4:6-9
Favorite Adoption Story: I now have two! I began working at A Helping Hand Adoption Agency (which later became Nightlight Christian Adoptions) the first week of May, 2007. That very same week, in Guatemala, a precious little boy was born. Four months later, our Guatemalan caseworker walked through the office holding two files in the air, one in each hand, praying “Dear God, we lift the files of these two boys up to you. We know that you know where their families are and we pray, dear Lord, that You will send them our way. Do not keep them waiting!” I asked to see the files and immediately fell in love with the most beautiful baby boy I had ever seen. One month later, we began the process of adoption. One year later, this little boy became my son! In November, 2020, my cousin was hospitalized due to Covid-19. She had custody of a child through the state foster care system she was planning to adopt. She was looking for someone to keep her while she recovered. I asked my husband if we could step in as “fictive kin” and he said “Sure! We can take care of a baby for 3 or 4 weeks!” My cousin went on a ventilator the following day and took months to recover from the virus. In the meantime, my husband and I had fallen head over heels in love with the happiest, most joyful little girl and were praying individually for what we later learned was the same thing. Neither of us wanted to ask my cousin, we wanted her to ask us to adopt her! She called a few days later after learning from her doctors that she would never recover to the ability to chase after a toddler and care for a child on her own and asked if we would like to make her our little girl. Our 3 to 4 weeks turned into forever in August, 2021!
Education: Dana holds an Associate of Arts in Paralegal Studies and a Bachelor of Science in Child & Family Studies from Eastern Kentucky University. Her Master’s Degree in Child & Family Studies was earned from Western Kentucky University. Dana is a member of the National Council on Family Relations and is certified as a Certified Family Life Educator (CFLE).
Responsibilities: As Executive Director, Dana oversees the programs of the Kentucky office, supervises its employees and runs the day to day functioning of the office.