I first received a file from Hong Kong and started advocating for this little girl (referred to as “Ella”) almost 4 years ago when she was only 1.5 years  old.

A lot of families showed interest in Ella but none moved forward because her special need was scary on paper with several unknowns regarding treatment. Ella was later matched with a family in June 2017. Several months later the match fell through due to personal reasons from the adoptive family. I continued to advocate for this sweet girl but didn’t receive any serious inquiries or commitments.

In April 2018, I received an email from a woman named Mrs. N that started out with saying “I’m not even sure how to begin this email, so please bear with me if I ramble. I was looking online at your waiting children and saw Ella’s profile and was interested. However, we’ve got a few hurdles that may mean it wouldn’t work, so I thought I’d ask before diving in.”

They had many hurdles. First, they were a military family stationed in Germany. They had 4 sons in the home. She also shared that they had actually recently been matched with an embryo and would be doing FET in June of that year.

At first glance, this just did not seem possible. Hong Kong won’t work with families who live outside of the US. Hong Kong is a guardianship country which makes the paperwork and post placement very complicated  or even impossible for families living overseas. Hong Kong also tends to favor families with 3 or less children in the home. I explained the obstacles and ended up telling the family that since they are already matched with an embryo, maybe they could consider international adoption again after the baby is born.

Mrs. N later responded with “Thank you so much for your response. I’m feeling so drawn to Ella, so I have a few more questions for you, if you don’t mind.  I just keep looking at Ella’s picture and thinking maybe the child that is already born and in need is the higher priority. I’ve looked at waiting children sites before but have never felt the pull like I do with her. I just don’t know what it means. My head and heart were so wrapped up in the embryo adoption, I honestly don’t even remember how or why I ended up on your site looking at Ella’s picture. It wasn’t even something we were considering. So I apologize for being very clueless. This has kind of blindsided me – in a good way…”

Mrs. N then told me they just received news from the military that they were scheduled to return to the US 2 years earlier than planned and will be stationed in a state where Nightlight is licensed in only 3 months! After a few more discussions, I sent the family Ella’s file to review and they submitted their application to the Social Welfare Institute (SWI). The SWI absolutely loved them! I told Mrs. N that I could not hold Ella’s file for the next 3 months while they are in Germany. She understood but was hopeful. In the meantime I had 2 more families submit an application to the SWI to be considered for Ella. The SWI finally responded and said they are waiting for the N family to return to the US because they want to place Ella with them!

Fast forward to February 2020. COVID was spreading throughout China and Hong Kong  and making its way to the US. Being in the military, Mr. N had to receive special permission, a 30 day notice, and top clearance to even travel to Hong Kong. It was a roller coaster of yeses and nos from the military as to whether he could travel or not. The family booked their flights and were scheduled to leave in only 2 days when Mr. N was told by the military that he could NOT travel. Hong Kong typically requires both parents to travel. What does this mean for them and for Ella who was expecting her mommy and daddy to be there in only 2 days to meet her. The family worked with their Congressman and Mr. N’s Commander to try and find some way to get to Ella.

The family was on their way to the airport anticipating Mrs. N would be boarding the flight alone when Mr. N received a call from a one star General giving him permission to get on the flight! Ella got to meet her mommy and daddy the very next day and was a daddy’s girl from day one.

Ella has been home 10 months now and is celebrating her first Christmas in the US and with her forever family. She is the perfect addition to the N family and her brothers absolutely adore her! She loves to sing and will request whoever is with her to sing along as well.  God knew the N’s were Ella’s family all along. With every obstacle from beginning to end, He was faithful. 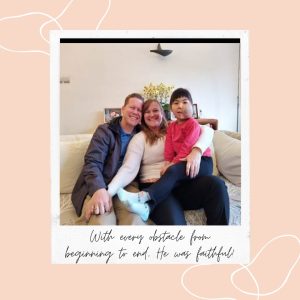