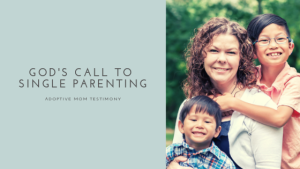 I have always known that I wanted to adopt. Like many women, I assumed that it would be after I was married. However, God had a different plan for me, and I continue to be blessed beyond anything I could have imagined. I am a single mama of two precious boys, both adopted from China. We are now in the process of adding a little princess to our family. Trusting God to build my family has been one of the most faith-building and awe-inspiring things in my life.

I work in a neonatal intensive care unit. When I was still in training, I came across a picture of my first son. God made it quite clear that he was my son. I am so thankful that God was faithful to speak loudly and clearly enough that even my feeble faith at the time could follow Him. It seemed illogical. I was in training. I was single. I was very stretched financially. And the child he showed me was a 5 year old boy. Weren’t single women supposed to adopt little girls? To top it off, this child was deaf, a special need that I wasn’t prepared for. No one in my family knew sign language and I knew that he NEEDED extended family if I was to adopt him as a single mama. Time after time, God moved mountains. Family members were learning sign language, finances came through at the last minute, and my precious son Samuel has now been home for 4.5 years. Beyond all explanation, this child who had no language for almost 6 years is now a fluent English language speaker.

Within the first year of coming home, Samuel began to pray for a brother. I should have known then what was coming! I wasn’t ready AT ALL. We had just moved to a new state where I knew no one so that Samuel could attend a school for the deaf. But God was moving. One year later, I began the process to adopt again, I thought this time for a little girl. Once again, I had no idea how God was going to do this, financially or otherwise. Three days later, a friend texted me the picture of a little boy, asking if I had seen him on the advocacy websites. On that same day, my agency called with a referral for a little girl, exactly the age and a manageable special need that was on my heart. A few minutes later, I stood at my computer and I saw the most beautiful, perfect little face pop up on my screen. She was a vision and I knew instantly that she wasn’t mine. I sobbed and sobbed. What was wrong with me? My heart kept pulling to the little boy in my text message. Seriously God? TWO BOYS? As a single mama? I thought for sure I was not hearing correctly. I called my agency back and asked for time to pray. Three days later, I called to decline the little girl’s file and accept the little boy’s but my faith-walk wasn’t over yet. This time God didn’t “write on the wall”. This time, it was a still small voice that I really wanted to drowned out. But HE gave me courage to walk forward. That most precious little boy was in my arms in FIVE AND A HALF MONTHS! Start to finish, this was the fastest journey I had ever heard about. God provided social supports and the necessary finances in the way only God can do. Once again, He provided where I saw no way. And my Averey? He is the cuddliest, most affectionate child I have ever met. He is the perfect, funny, light-hearted balance to my serious, determined first son. They are the family only God could build.

Then in September of 2017, Averey started praying for a little sister. It took awhile for his brother to come around, but then they ganged up on me. And here we are, at another cross-roads. I have no more idea what God has in store this time than I did the other times. Samuel has graduated from the school for the deaf and both boys are attending a public school for the first time this year. We were able to move to a smaller community closer to friends and family and things have settled into a nice even pace again.

Like with Samuel and Averey, God led to my daughter. Our precious little girl (“little sister” as we refer to her at home) is waiting for us in China and we are well on our way to bringing her home. God has shown Himself already in a million ways like only He can. It gets harder each time to figure out the finances of adoption. I have expired my retirement, I just bought my first house ever with zero down and am still paying on my college loans. It seems risky at worst, unwise at best, but I have seen HIM through this process more clearly than I ever have before. He has changed me, shaped me, and molded me through the stretching of my faith. He has built a village around us and continues to do so. I continue to pray for His guidance and His provision. It is a scary thing, walking into adoption as a single parent. I watch my boys sleeping at night and am in awe that I get to co-parent them. They love to tell people who ask, “My daddy is God.” I guess that pretty well sums it up.