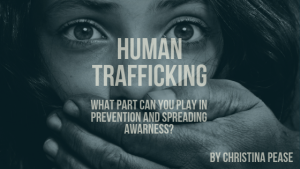 Saroo was lost. He panicked at first and then started to wander through India by himself at just five-years old. In the 2016 film Lion, Saroo is depicted as hungry, disheveled, with a blank stare behind his big-brown eyes. He’s completely alone and vulnerable. At one point, a group of men try to kidnap him along with other children living on the street. Later, Saroo senses that a woman and another man trying to befriend him are not safe either. He manages to escape them too.

Begin to understand the problem.

The United States Department of Homeland Security defines human trafficking as modern-day slavery that involves the use of force, fraud, or coercion to obtain some type of labor or commercial sex act. It’s estimated that there are over 40 million men, women, and children from all over the globe – including the United States – who are currently trapped in modern-day slavery. It can take the form of sex trafficking, forced labor, forced marriage, child soldiers, or debt bondage.

There can be warning signs that someone is trapped. Victims might experience poor living conditions, poor mental health, poor physical health, or lack of control. Are they fearful or submissive? Do they have visible marks or bruising? Are they living with their employer? Are they not in possession of identification documents or lacking access to them? Are they unable to speak for themselves when asked questions? Do they have tattoos or branding that signify ownership? When we think something is wrong, we can make a report to social services. The National Human Trafficking hotline is 1-888-373-7888. Help is available.

When it comes to forced labor, we can buy less and buy from second-hand retailers which is more than your local thrift shop these days. This decreases the demand for quickly produced, cheap goods. We can also support ethical brands, brands that employ survivors, and look for the fair trade label on products we purchase. There are even companies like DoneGood which recommend ethical shops to empower consumers or apps like Good On You to help us find what we need while following our convictions. What we spend money on is an indication of our values.

We can promote, make donations, and volunteer for organizations that are making a real difference in local communities and around the world. Just one example is International Justice Mission (IJM) which combats slavery, trafficking, other forms of violence against the poor by rescuing and restoring victims, holding perpetrators accountable, and transforming broken public justice systems. We have a voice. At the government level, there is legislation that can protect victims and hold traffickers accountable. A resource for learning more about current legislation related to human trafficking is Polaris Project.

Wear Blue Day is on Friday, January 11th when people can simply wear blue in acknowledgment of human trafficking victims and survivors. The National Sexual Violence Resource Center asks participants to post pictures on social media with the meaning behind this act of solidarity for them. Dressember is a campaign when advocates wear a dress every day during the month of December to raise awareness and funds for several organizations in the fight against human trafficking.

We know that stressful or traumatic childhood events including abuse or neglect, and homelessness create more vulnerability to exploitation. Youth in group homes are actively recruited, and social workers are trained to recognize the signs of recruitment. At-risk children long for family. Adoption can protect children and young people who are the most vulnerable to human trafficking.

Like all stories of adoption Saroo’s story is emotional and layered. A couple from Australia adopt Saroo from an orphanage, and as a young adult he begins to explore his origins. The movie walks us through an incredible, inspiring, positive healing process with closure – which we know is not always the case for everyone. But it also shows how one life could have taken a very, very dark turn if not for the investment of the man who noticed him on the street and took him to authorities, the people who prepared him for adoption, and the couple who adopted him into their family.