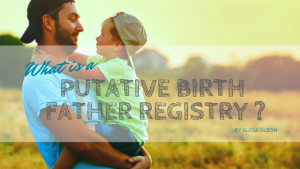 If you have researched domestic infant adoption, you may have heard the terms putative father, putative father registry or birth father registry.  A putative father is a man who is believed to be the biological father of a child when he is not married to the mother at the time of birth.  Unfortunately these men are only known to adoption agencies or attorneys if the birth mother names them.  If the birthmother is unwilling or unable to identify the father of her child, it is impossible to locate him.  As such, this gentleman may not be informed of the child’s birth or the potential adoption process.  In some cases, he may not even know that he has fathered a child.  States are faced with the question of how to protect the parental rights of these men.  A man has the right to know he has fathered a child and the right to choose to parent the child if he desires and is able, just as the birth mother has the right to do so.

Each state has its own law on how to proceed with an adoption involving a putative father.  Some states require a man to support the birthmother and be involved in her life during the pregnancy to establish his parental rights.  Generally a set period of time has to pass after the birth of the child without any supportive action from the putative father for a court to proceed with terminating his parental rights.  If a birthfather is unknown, there can be increased legal risk for the adoptive placement.  When a gentleman becomes aware of his child after being placed for adoption, a long legal battle can ensue with possible disruption after a child has attached to their adoptive parents.  The case of baby Jessica [1993], removed from her adoptive parents at the age of 2 years to be placed with her biological father, is an example of this.

Many states have responded to this ethical dilemma by using putative birth father registries, which require a man to register if he believes he has fathered a child and would like to assert his parental rights.  Currently over 30 states have such registries and each operates slightly differently.    There is generally a limited time period for him to register after the birth of his potential child.  Registration commonly includes providing his name, verifiable identifying information, location and contact information, as well as any information he has for the woman with whom he was intimate, including approximate date.  During an adoption process, an adoption agency or attorney checks the registry for matches to the birthmother making the adoption plan.  If a match is found, the man is then notified of the birth and the adoption proceedings.  If he does not respond, his parental rights can be terminated along with the birthmother’s so the adoption may proceed.

One of the limitations of the current system is that each state operates their putative father registry separately.  If a child is conceived in one state but born in another, a man may not know to register in both states.  It is entirely possible for a child to be born outside of the state where the man is registered and he is therefore never notified.  The Permanency for Children Act of 2017 (HR 3092) proposes a national putative father registry to prevent such issues, assisting states in locating putative fathers in other states.  This bi-partisan bill proposes expanding the use of the Federal Parent Locator Service to cooperate with state systems and cross-reference to exchange information.  The FPLS is currently used to establish paternity and locate parents specifically for child support obligations.  This framework and system is a logical starting point for national cooperation and oversight of a federal putative father system.

If you would like to learn more, I encourage you to do the following: