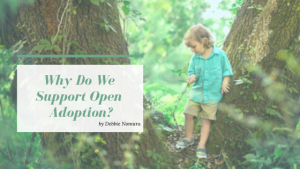 I’ve been working in adoptions long enough to see the significant trend toward open adoptions over the past forty years. I recall sitting in meetings in the 70’ and 80’s with an Adoption Committee in the first agency where I worked doing the matching of birth parents and adoptive parents. Actually it was a matching of child and adoptive parents because the couple would never meet the birth parents; it was just important that the child had features or background matching that of the adoptive parents. The adopting couple received a piece of paper with information about the birth mother and birth father, and in turn, the birth parents would receive information about the couple. First names only, if that, and perhaps some additional non-identifying facts. Then, the baby, who had been in foster care from birth awaiting the legal work to be done, would be placed in the arms of the adoptive family. Happy endings? Yes, usually more so for the family than the birth parent. Could it be better? Yes.

Secrecy surrounding adoptions began in the 40’s and 50’s with good intentions. It was believed to protect all the parties involved.

They were protected from dealing with their infertility and from facing the differences between being a parent through adoption vs. being a parent by birth.

Closed records also precluded the possibility of birth relatives seeking out the child, or heaven forbid, set them up for a potential kidnapping. Fear was the driving force.

By the 70’s adoptees were beginning to speak out about the fact they did not know anything about their biological families and their heritage. They had been cut off from that part of their lives. As a result of their efforts over the past three or four decades, the practice of secrecy has taken a turn–for several reasons:

Adoptees have voiced their belief that they have the right to know more about their biological roots. Birth parents have said they want to know that their child has had a good life. If they haven’t said it out loud (which many could not in years gone by), they have thought it—every day.

Adoptive parents have come to desire that connection for themselves and their child. They understand that a relationship with the birth parent does not diminish their role in the child’s life – or heart. Single parenthood, being adopted and infertility no longer carry the stigma they once did.

Adoption professionals, lawmakers and counselors have listened to the voices and tried to make laws and policies that provide helpful answers for all. Underlying our effort at Nightlight is our confident belief that some level of openness is good and emotionally healthy for all parties. It can be in the form of meetings, visits, letters, pictures, texts, videos, Facebook page or any number of other ways to have contact. In order to be a good fit for individuals in the adoption triad, relationships must be customized, but all good open adoptions are characterized by open hearts, understanding and a good amount of trust.

When birth parents and adoptive parents meet, there is a “realness” that appears. These are no longer people in a book, or birthparents who don’t care about the baby. They are real caring families who want to be parents more than anything meeting with a woman who is trying to make the right decision for her child in spite of her own sadness. Fears on both sides melt away, and relationships begin.

As contact continues through the lifetime of the child, the relationship can change, as all relationships do. They may increase or decrease in frequency. Lives go in different directions, but the child will know that everyone in his life, whether contact is frequent or not, that he is loved by everyone in his world. We now have several years’ experience with openness in adoption and they have proven to have very positive outcomes.

It seems that society at large and those who have not had a recent connection with adoption continue to believe that closed adoptions are the best. Having a relationship with birth parents is a scary proposition… “we’d really feel better if we could just go on down the road and pretend there are no other connections out there.” But the truth is there is another dimension to the child’s life. Adoptive parents’ lives can be greatly enriched by opening their hearts and getting to know the person responsible for bringing life to their child. Meeting and establishing a relationship is the greatest honor that can be given to a birth mother–to the person that has entrusted her child, and all her hopes and dreams for him to the care of the adoptive parents. It is an act that binds them together.