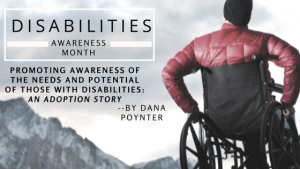 Lilly, born in China, was welcomed into the loving arms of her mom and dad, Jenny and Daniel, at the age of 3 years.  That was nearly a decade ago, not long after I began working with the China program!  I recently reconnected with Jenny to talk about Lilly’s journey over the past ten years.   Jenny fondly recalls the excitement of being matched with Lilly.  Although they were thrilled to become parents, there were looming questions about her diagnosis which had the potential to cause great fear.  Lilly was born with spina bifida and hydrocephalus, both of which were surgically repaired in China shortly after her birth.  Jenny shared that while she and her husband were hopeful that the surgeries had been successful, they did not know the extent of damage or what her future would hold.

As directed, they researched her medical needs and spoke to a physician specializing in international adoption.  They learned of worst case scenarios while staying cautiously optimistic.  Jenny stated it was easy to allow fear to slip in as they waited to travel.  While worrying about mobility issues, possible paralysis, cognitive deficits, future needs and surgeries, they also began thinking about accommodations that could be made to ensure she was given the best life they could provide for her.  Through it all, they trusted God would provide and pressed forward.

Lilly came to them as a tiny 28 pound 3 year old wearing 12-18 month clothing.  She could barely walk and had many other physical delays common of children coming from less than optimal care.  These deficits were quickly overcome through short term therapy. Jenny reports, however, that the personality that emerged within a few days of placement in China is the same personality Lilly exhibits today which has allowed her to overcome and flourish.

Due to the spina bifida, Lilly has some hip displacement and wears braces on her legs requiring occasional appointments at Shriners Hospital for adjustments.  Because of the hydrocephalus, she has a shunt and sees a neurologist every other year.  She also requires annual visits to an ophthalmologist to check the pressure behind her eyes.  Despite the braces, mobility is not an issue and she even cheers for an Upward basketball team!  She is actively involved in choir, musicals and theatre and does not allow her orthotics to limit her abilities. Cognitively, she is fine and does well in school.  Other than medical visits to monitor her conditions, Lilly is a typical pre-teen on the brink of celebrating her 13th birthday next month.

Jenny told me that as a parent, her greatest challenge has been advocating for her daughter medically.  While she trusts her treating specialists and referred to them as “amazing,” she also trusts her own instincts as Lilly’s mother.  She shared that the neuro department wanted to perform a procedure on Lilly’s shunt, however, Lilly was not showing any neurological symptoms to indicate intervention was needed at the time.  Despite the surgical recommendation, they made a decision together as a family to wait after learning there were more risks with having the surgery than not.  They realize that surgery may be needed in the future and will face that when the time comes.

Jenny and Daniel have also taught Lilly how to deal with curious questions from her friends as well as prying questions from others.  They have given her the confidence that her adoption story and tough beginning are HER story and she can choose to share the details or keep them private.  Her outgoing personality works to her favor in this regard. 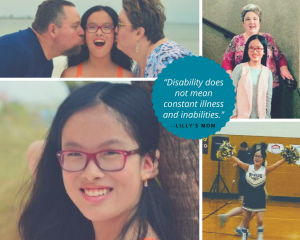 When I asked Jenny what she would like other parents to know as they consider a special needs adoption, she said, “Disability does not mean constant illness and inabilities.”  She shared that Lilly is a very healthy child and in the past 10 years, has probably seen her pediatrician for sick visits only 3-4 times.  She also reiterated all of the positives in Lilly’s life and above all she wanted to share that Lilly had taught her and the rest of their family to persevere.  Watching Lilly navigate the hardships in her life “has been amazing to see!”  In talking with Jenny, it became clear long before she said it that, “As her mother, she makes me so proud!”

2 Timothy 1:7 For God gave us a spirit not of fear but of power and love and self-control.

Philippians 4:6-7 Do not be anxious about anything, but in everything by prayer and supplication with thanksgiving let your requests be made known to God.  And the peace of God, which surpasses all understanding, will guard your hearts and your minds in Christ Jesus.