Whenever I think about David and Goliath, I am reminded that one of the reasons David had so much faith in God and was confident God would deliver Goliath into his hands was because of the many times God had done this before. In order for us to build our faith in the midst of struggle, we have to remember all the times that God has delivered us before. I have a faith building story that I want to share with you.

But David said to Saul, “Your servant has been keeping his father’s sheep. When a lion or a bear came and carried off a sheep from the flock, I went after it, struck it and rescued the sheep from its mouth. When it turned on me, I seized it by its hair, struck it and killed it. Your servant has killed both the lion and the bear; this uncircumcised Philistine will be like one of them, because he has defied the armies of the living God. The LORD who rescued me from the paw of the lion and the paw of the bear will rescue me from the hand of this Philistine.” I Samuel 17: 34-37

In 2012 I received a profile on a waiting child from Hong Kong named “Michael”. When I first learned about Michael, he was 10 years old, and he was Nightlight’s first child matched through the Hong Kong program in September of 2012. He was matched with a family that I had previously worked with in our domestic program in South Carolina. It seemed like such a wonderful God story to have a family come forward to adopt him before I even got him on our waiting list. (Of course, God had an even bigger trophy of His grace in mind.) The adoption process in Hong Kong is long and slow. The adoptive family just 8 weeks prior to travel and without warning backed out of the adoption on 1/15/2014. In fact, I spoke with them at 1:19PM. I was devastated as Michael was now 11 ½ and would be much harder to match or so I thought.

On the same day the first family backed out, I received an e-mail from another family named George and Kim. Kim e-mailed an inquiry for Uganda. She was interested in adopting from Uganda because she had recently been on a mission trip there. I e-mailed Kim some information and scheduled a conference call with her for 1/17/14 at 11AM. I spoke with Kim on 1/17/14 at our scheduled time about the Uganda program, but Kim was most interested in an older male child. 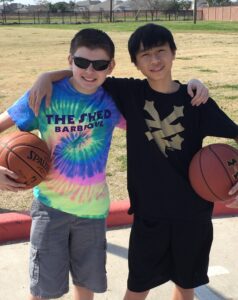 Our baby home only takes children up to age 6 years old, and Kim shared with me that her youngest son was 13. She desired to adopt a younger brother but not too many years younger. I then shared with Kim, Michael’s story. Kim was moved and asked me to send her Michael’s file. By 2:47PM that afternoon I had an e-mail from Kim that read:

So, I just got off the phone with George after a lengthy conversation, and we have decided that Michael seems like a very special person that we as a family can embrace and love forever. We know that we can offer him a loving and supporting home, along with companionship from a sibling close in age to him. His story really struck me, especially after you mentioned the idea behind adoption being more about not what we can get from an adoption or choosing someone specifically to fit our needs but about how we can fit the needs of a child. We can love someone forever no matter where they come from. Financially, it seems to be a bit lighter as well, and also the timing, hopefully, will be quicker from start to finish. We can pray anyway! – Kim

Needless to say, I was shocked and amazed at God’s perfect timing and answer to prayer. Although the adoption process from Hong Kong is slow, everyone agreed (including the folks in Hong Kong) to try to expedite this case because Michael had already been waiting for a year and a half. Michael now named John arrived home with his forever family on 2/7/2015. 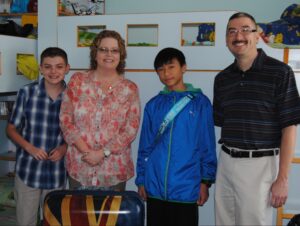 Not only did God answer our prayers for Michael but He did so before we even asked, before we even knew that the first family would be backing out! We serve an amazing God, and I am so blessed to be used as an instrument in his wonderful plan to care for the fatherless. I hope that you all will be encouraged and trust Him to move mountains. I have attached a photo of John with his forever family! To God be the glory!

“Now unto him that is able to do exceeding abundantly above all that we ask or think, according to the power that worketh in us,” Ephesians 3:20