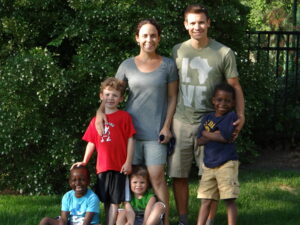 Adam and Melanie initially were interested in adopting children under the age of four years old. When they heard about two brothers in Uganda named Aaron (approximately age 7) and Enoch (approximately age 5), they committed their decision to prayer. They felt the Lord calling them to adopt these boys. They immediately began the work of having their home study updated and educating themselves about adopting older children. Adam and Melanie arrived home with Aaron and Enoch on May 15, 2013. They have seen favor and miracles all along their adoption story. Below is Adam’s account of their day in court:

“Court was miraculous today…literally. We waited about 2 hours past our scheduled time and then saw the judge for another 2+ hours. It was the first time anyone from our agency had gone before him, and admittedly there were some nerves. But, our lawyer is the best in the biz, all the witnesses showed up (even the child’s ailing grandmother and their previous caretaker from Juba). That in itself is a miracle. But what was most amazing was that the judge turned out to be best friends with our babies home director’s late parents…he was in disbelief that this man was standing before him that he could literally remember the day of his birth, the place his parents met and had watched him play as a child. He got to share with the judge his story and passion for beginning his ministry and the judge said that he intended to actually visit the baby home in the future. He was serious about it and this was a shocking circumstance, and an emotional one at that. What is even more amazing is that the director’s affidavit was placed on the top of the stack in error, and had it been filed properly the judge never would have seen it or known he was even in the room. Praise God. He orchestrated this from the beginning the meeting and from that point forward, the whole crowd had favor with this man. The testimony of the woman from Juba was emotional. She loves these boys so much that she traveled to Kampala just to be here and it turns out she was the only person other than Melanie (this is Adam writing by the way) and the director that the judge chose to interview. Her story almost brought him to tears. You must realize all of this is very out of the ordinary. This was God from the first word.

Additionally he was very pleased with our effort to engage the boys’ Buganda culture. He literally thanked us and referred to this case as “the best of the best.”

We are so grateful for the prayers of hundreds that we would find favor that day. They were so obvious!

It was also so good to meet and be loved on by people who have known our boys. We got to take many pictures and will have an amazing story to tell them one day! These are beautiful people, most of whom have nothing, that have sacrificed everything for the good of our kids since their mother died. Praise God for them!

And praise Him with us for this significant connection between this new judge and our baby home. This is no doubt a really big deal moving forward for the incredible ministry we are affiliated with.”