According to UNICEF, before the earthquake hit Haiti, there were 380,000 orphans—some living in orphanages—most others living on the streets. Many children could not even get into orphanages, as often there was little room and resources to provide for them, until a sponsoring adoptive family could be found. That number may have now tripled to one million. Because of the great crisis, the first order of business is to meet the physical needs of the children. 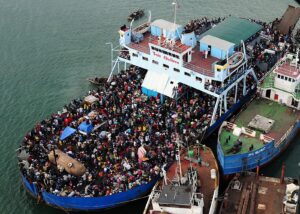 The next is to care for the orphans who were orphans before the earthquake and then to reunite those newly orphaned children with relatives if at all possible. This needs to be done quickly—find a relative or find a home for a child. Children grow quickly. They need families while they are children.

To do less for orphans is to be reminded of what happens when we turn our backs on those who need our help as shown in Voyage of Damned,  a movie based on the 1939 real life story of a ship carrying 937 Jews from Germany to Havana, Cuba. These Jews knew that with the rise of anti-Semitism in Germany they needed to escape. However, the journey to Cuba was propaganda for the Germans, and the Jews were not permitted to step onto the shores of Cuba. Cuba had recently changed its immigration laws, and only those who had more than tourist visas could finally go ashore. Only 22 of the 937 had the proper immigration documents. The ship then tried to enter the US in Florida, but the Coast Guard stopped them. We all know what happened from there for those on the ship. Later, a Nazi official said that when the whole world had refused to take in Jews as refugees, no country could blame Germany for what happened to the Jews.

Writing together about adoption and the horrors of Nazi Germany may seem like an overstated link. Yet, when certain children cannot enter the US because their government does not have a strong enough infrastructure to produce a proper birth certificate or because a few people actually bribed officials to move the adoption paperwork along faster, thus causing a closure of the adoption program, then the end result is that children will be left behind in orphanages to suffer and often times die. Certainly most of these children will not die because of deliberate and calculated measures, as taken by the Nazis, but because of neglect. Those children who do survive often suffer the horrors of being trafficked as modern day slaves—being forced to work in sub-human conditions or to enter into child prostitution. For the children who do get to live in an orphanage and “graduate” their fate is also dismal: most will turn to a life of alcoholism, drug abuse, prostitution, and crime if they are not the one in ten orphans who eventually commits suicide. So in essence we have put babies and children on the boat to find a home, but have had to turn them back because their documentation does not meet our or their country’s standards

Others would argue that even if all the children had the right documentation, we Americans could not possibly adopt the 147 million orphans worldwide—thus the implication that just because we cannot adopt all of them, we should not adopt any of them and other measures should be taken to care for them. Indeed, many orphans are already being cared for by other relatives. In fact, only about one-tenth or all orphans are truly orphans—having neither mother, father nor other relative to care for them. This leaves only about one and half million orphans–still too large a number for all US citizens to adopt.

But what if other countries, including the child’s own country, started adopting children who were orphans? We could not rescue every orphan, but we could make a great impact on the world. After all, the US population is 300,000 million strong.

In addition, if more orphans could be adopted, adoptive families, their families, and churches and other groups would then have a connection to a country and seek to make improvements for the people. The love of a parent and child is profound and can bridge many gaps. Adoptive parents will and do go back to their children’s homelands to make a difference for the people and the children helping to reduce the number of children becoming orphans due to poverty and death. This also gives the adopted child the opportunity to experience his history, culture, and possibly meet his birthfamily.

Perhaps as a result of the great number of international adoptive families, there has been a greater focus on Christians caring for orphans. More churches and para-church organizations are answering the call to practice true religion and to care for the least of these. These groups can care for the physical and spiritual needs of the children. However, every child, as research keeps showing us, needs a loving family to reach their full potential. A host of mental and physical problems are clearly associated with growing up in an institution—never mind on the streets or in a garbage dump.

Yet, in spite of the greater interest we as Americans have taken in adoption and the research proving that children need to be in families, children being adopted from other countries into the US fell sharply once again this past year. This is not due to lack of interest or economics. This is due to government regulations limiting or disallowing adoptions. Through these policies, we have children who cannot enter our country—the most generous country in the world. And these policies will keep the Haitian children who have been orphaned even before the earthquake out of our country.

We cannot expect countries to meet our standards for documentation when they cannot even feed and care for their children. As an adoption community, we need to advocate for opening country programs. If all the countries that were once open to adoption were to reopen : Cambodia, Guatemala, Romania, Vietnam, then there would be no high demand for babies and far less corruption. These babies would be placed early on in a family; instead, these babies and children are on a voyage to poverty, emotional deprivation, malnutrition, crime, and even death.

We now have an opportunity to show that American is great because we care. Please pray for the release of true orphans for adoption.