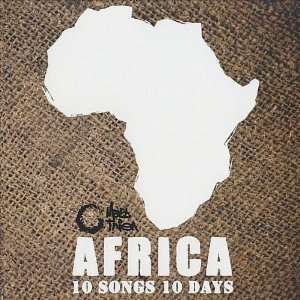 Matt Thien and his wife Christie live in Conyers, GA, with their two young children, Baylee and Brayden. A Naval flight officer, Matt also has established himself as an independent musician becoming involved in writing, composing, recording, and all things encompassing music business for the last 2-and-a-half years. His passion for music has taken a humanitarian focus as his most recent CD project 10 Songs 10 Days Africa was established to benefit the Tumaini Mission Center in Nakuru, Kenya, home to over 100 orphans. Matt spoke with us regarding the inspiration for his project and how the gospel has influenced his view of humanitarian aid and orphan care.

This project was inspired by a mission trip to Kenya. Describe how that trip touched your life and gave you the inspiration for 10 Songs 10 Days Africa.

A friend approached me earlier this year saying she had experienced a dream where I was in Kenya playing my guitar and doing a concert for some of the Kenyan people. The description of that dream really stuck with me and I decided that I would pursue a mission trip to Kenya.

An organization called The Beech Foundation organizes bi-annual mission trips to Kenya to work with several churches and missions in the area of Nakuru. I joined one of their trips in June of this year and wanted to use my talent as a musician to somehow become involved in supporting these brothers and sisters in Christ. The trip would last ten days in Kenya so I prayed that God would grant me the creative ability to write 10 songs in the 10 days while I was there, hence the title “10 Songs 10 Days Africa.”

While in Kenya, I become particularly drawn to the Tumaini Mission Center. Tumaini means “hope” and the people there possessed a commitment to God and contentment that I found lacking in myself. Spending time with the staff and orphans at the mission really affected me and my time there, coupled with the Kenyan landscape, inspired the 10 songs.

My vision was always to create some residual income for people that need it. This CD project will go on, Lord willing, and will continue to provide support for the orphans and staff at the mission center.

What is the main message of this project?

The main message of this project is to help others realize that they can use their gifts to help their brothers and sisters in Christ. Galatians 6:10 states, “Therefore, as we have opportunity, let us do good to all people, especially to those who belong to the family of believers.” When someone asks me why I am not just involved with something locally, I describe how the Kenyan people that I met exemplified an unpredictable contentment, compassion, and deep love for God that I had never experienced before or seen in others around me. It touched me and I felt that these were the people I needed to help — my brothers and sisters in Christ!

How do you think the gospel should influence the decision to pursue orphan care?

I believe that the gospel is a living, breathing thing that should most heavily influence our lives, as believers. When you reflect on the ministry Jesus had while on this earth, he had such a compassion and love for the people he encountered, regardless of race, language, socioeconomic status, health, etc., he did not exclude anyone from his message — from his care. James 1:27 says, “Religion that God our Father accepts as pure and faultless is this: to look after orphans and widows in their distress and to keep oneself from being polluted by the world.” The mission houses over 100 orphans and, based on James 1:27, I feel drawn to reach out to them.

What do you believe to be the implications of orphan care in the local church?

When you look at the gospel and take into consideration the global orphan crisis, investment in this cause is considered an investment in the advancement of the kingdom of God. I believe the local church, being part of a global church, is unified when we pursue the wellbeing of those that God holds dear — orphans (James 1:27).

What has been the response to your project, thus far?

There has been an unbelievable response from both friends and strangers alike. Everybody I’ve spoken to has wanted to be involved and come on board with this project in some way. Companies and businesses have invested time and money for the production of the CD, individuals with particular talents have come forward to offer their services to promote the project, and the church community here in Conyers Georgia is seeing this project is about the kingdom of God, rather than a local musician.

Each of us, as a member of the body of Christ, has a part in completing the body. This project has shown me that I’m not the whole body but merely one part. I need to pray for and rely on others who are gifted in different ways to come along side me and bring this project to fruition. This project has been a great example of what the body of Christ is capable of. In our local church, there has already been a desire to help more extensively through fundraising for the Tumaini Mission Center

The income from the CD project is going directly to the Tumaini Mission Center and is being matched dime for dime by the Beech Foundation (www.thebeechfoundation.org), which has established a relationship of trust with the churches and missions in Nakuru, Kenya. They have been both a financial and prayer bridge to the Kenyan people. God has already been so good to provide for us extensively along the journey of the project.

What would be your encouragement to others who want to come along side and use talents that they have to help orphans or missions around the world?