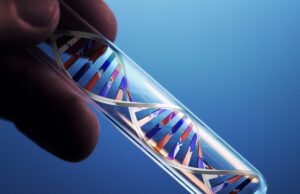 Recently I received an email regarding a physician who is offering genetic screening for people who have been adopted. Apparently some parents whose children have little or no medical background information see this as a way to gain important medical background information for their children. After all, no matter how many times we tell our children’s pediatricians that they are adopted, medical professionals continue to ask, “Does this run in the family?” Recently, my 18-year-old daughter had a kidney stone. The first question from the doctor was “Does this run in your family?” Well, yes, kidney stones do run in my family, but that information isn’t very helpful!

It’s not just adoptive parents seeking this sort of information. Kids want to know their genetic background, too — and not just for medical reasons. So I sent an email to a friend of mine who teaches genetics, and this is what he had to say (posted — in slightly edited form — with his permission):

As you might imagine, I deal with the ethical issues surrounding DNA testing all the time in classes. I’m sure you deal with them in your practice too.

Right now, the ‘profiles’ being offered to predict disease and traits are pretty useless. For instance, one guy markets a test for bipolar disorder that, if it comes back positive, indicates that your risk for having bipolar disorder is three fold greater than average. . . . From 1% to 3%! Yet the patients and doctors don’t understand that 97% of people whose test comes back ‘positive’ do not have and will never develop bipolar disorder!

Anyway, the idea of an adoptee having access to a detailed medical history through a DNA profile is bogus . . . at least for now. In a decade, maybe that will change. The technology is there; it’s just not well developed yet.

On the other hand, DNA profiling for identity, paternity, and yes, even heritage is strong enough to be used in court, as you know. So an adoptee could, in theory at least, have a profile done that comes back and says, your biological father can most likely trace his heritage back to the Greek Islands; your biological mother to the West Coast of Africa; that approximately 1/4 of your ancestry seems to be of Eastern European Jewish ancestry, etc.

As you know, DNA typing can even identify individuals around the world that your adoptee might be most closely related to. And it’s strong enough to have forced Thomas Jefferson’s great-great grandchildren to admit that he fathered a child with one of his slaves, over 200 years ago!

This type of analysis hasn’t caught on to the public yet. Although this year for the first time we’re doing it for all of our genetics students, to trace their maternal lineage! With the cost coming down so dramatically (it will cost us about $9 to do it for our students; and people can get it online for a few hundred), it won’t be long.