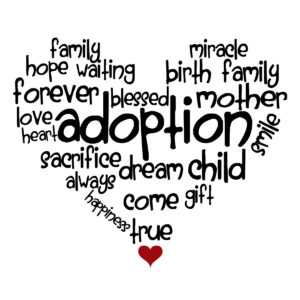 In general, I like the idea of using “positive adoption language.” (Frankly, calling it “accurate adoption language” strikes me as a little pompous and even disingenuous. It suggests that the “truth” about adoption is always positive and never negative. But that’s a topic for another post.) In spite of my general inclination to use positive language about adoption, some of the positive-negative pairs strike me as odd. One is the “parent” vs. “adoptive parent” contrast.

I understand why this distinction is made: if Sally’s dad is always referred to as her “adoptive dad,” then there is certainly the suggestion that Sally’s relationship to her family (created through adoption) is unusual and hence merits regular mention. We’ll call this the “mentionability” issue.

Mentionability, however, is not necessarily negative (as the chart implies by calling the term adoptive family “negative”). We often use language to highlight positive features of other people — things that make them “stand out.” Because adoption is far less common than procreation as a means of building a family, families formed by adoption are “mentionable.” (Yes, I know that adoption is quite common. But it’s not nearly as common as children entering a family through birth.)

The real question (if we’re talking about positive/negative terms) is how a culture views adoption — what connotations adoption itself has. I suspect that “adoptive parent” is a negative term only for people who have negative conceptions about adoption. If you want to change conceptions about adoption, the way to do it is not to stop mentioning adoption.

So what about the term “adoptive parents”? Frankly, it’s too useful a term to throw out. We need it for research about adoption. We need it at adoption agencies to talk about families who have chosen adoption. Adoptive parents themselves need it sometimes to talk about their experiences and about other members of their adoption community. The alternative is to be forever using circumlocutions that say exactly the same thing as the terser “adoptive parent.”

On the other hand, people with mentionable qualities — even positive ones — grow weary of having the same things mentioned all the time. We all want to blend in. (Just talk to someone with an advanced degree who’s sick of being introduced as “Dr.” So-and-So.) The issue isn’t whether “adoptive parent” is negative (or inaccurate!); it’s whether it really needs to be said in most cases. If you’re not an adoptive parent and you think that yes, it does need to be mentioned every time, then you might explore your personal attitudes about adoption.

To those involved in adoption, my recommendation for talking about adoption language is this: be careful about dividing words up into “good” and “bad.” Instead, talk about terms that are appropriate to the context (context includes things like the speaker and hearer/audience, and the topic of the conversation). This sort of perspective on adoption language can guard us from making over-general pronouncements that are impossible — even for us — to maintain.