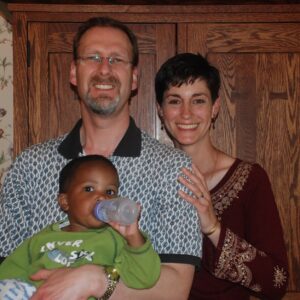 Adopting Black children changed my life dramatically. I know now that it didn’t have to. The reality was that I could have continued my comfortable urban life and expected the children to adapt to where I was. I also know that if I had set those expectations up in my heart, it would have been much harder to experience the growth I needed in order to mother my Black kids well.

When I talk with adoptive families about parenting children of another race or culture, I often have the analogy of my parents in mind. My mother was an American citizen and my father was British. Our home was filled with the best of both worlds and they embraced each other’s cultures as a central part of their life. My father has passed on now, but my mother is still strongly connected to his British relations and the ‘flavor’ of the culture that she married into. From tea time to horse brasses, her home is filled with the beauty of both worlds. One of my strongest memories as a teen is hanging the American flag alongside the British one on our front porch – we were a family with two cultures and both were important to our identity.

But it didn’t have to be that way. My mother could have followed the 1970’s fashions in decorating rather than filling our home with English antiques, she could have stuck to the Betty Crocker Cookbook and I would never have developed a taste for roasted Brussels sprouts, and she might have looked down on my father for not immediately becoming an American citizen. She could have done all these things to force him into her comfort zone, but she chose the harder thing and embraced all the parts of him. I think their marriage was stronger for it and I know that my parenting is absolutely better because I am willing to go into my children’s birth-cultures and experience life with them. Rather than bending my adopted children to fit into my small vision of how life should look, I now have a broader undertanding of how our family culture is supposed to reflect the great God who created it.