Throughout this new series of posts on the importance of adoption within the story of redemption I am going to use the word adoption in two different ways. First, I will refer to the practice of couples adopting children, both domestically and internationally, as earthly adoption. Second, I will refer to God’s adoption of us as heavenly adoption. 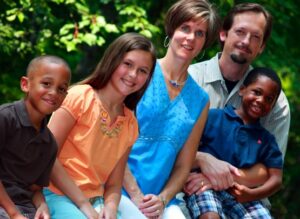 You may be wondering why I have asked this question. Let me explain by telling you a little about my family. God has given me the great and wonderful privilege of being an adoptive father of a multi-ethnic family. We are, what the adoption community calls, a conspicuous family. God gave us our first two children (a girl and boy) through biology and our next two children, two black boys, Isaiah and Noah, through adoption. I absolutely love being the father of a multi-ethnic family! It has its unique challenges, but it is a great joy to be in a family that mirrors, in miniature and imperfectly, the multi-ethnic family of God. Shortly after we adopted our second black child, a husband and wife were sharing in our excitement over the new addition to our family. I happened to be holding him as we were talking. After I finished telling his adoption story, the wife paused, looked at our two boys and then asked, “Are you and Melissa planning on telling them that they are adopted?”

I waited to see if her face would provide me with any evidence that she was joking. It didn’t. Not even the slightest smile or smirk could be found. It appeared she was serious (I often wonder what her husband thought of her question!). So how did I respond? I simply said, “Yes, we are planning on telling them.”

If you are parents of an adoptive family, you have been asked similar questions. But I’m convinced that fewer questions like the one above would be asked if we thought of heavenly adoption before we thought of earthly adoption, if we thought vertically before we thought horizontally. Why? Because for Christians adoption is central to what defines us. The apostle Paul is very clear: we are God’s children through adoption. I don’t know if you have ever thought about it like this, but God is an adoptive Father. Jesus, our Elder Brother, is God the Father’s eternal, only-begotten, natural Son. We believers are His children through adoption. This identity is fundamental to who we are. As adopted children, we enjoy all the rights and privileges of the relationship that God the Father enjoys with His eternal Son. This is an amazing reality and eternal privilege! We will forever be God’s children through adoption.

It is essential that we recognize that our adoption into God’s multi-ethnic family defines who we are. It is not incidental to our Christian identity. It is fundamental. If the truth of our adoption in Jesus Christ, our Elder Brother, were functionally central to our identity, in other words, if we daily thought of ourselves as God’s children through adoption and rejoiced in what we now have as members of God’s family, questions about whether adoptive parents will tell their children that they were adopted would not be asked. Instead, we would instinctively think, “Of course Christian adoptive parents will tell their children that they were adopted because adoption is how God brought them into His family and how, on an earthly level, God brought their children into their family.”