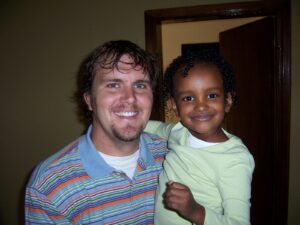 As the result of one of our first adoption interviews, I had the opportunity to meet (via e-mail) a missionary who serves in Ethiopia. It did not take much interaction for me to sense a kindred-spirit. Anthony Mathenia is passionate about the gospel and loves the people of Ethiopia deeply. He and his wife, Amber, have served in Ethiopia as missionaries for two years. My interaction with Anthony through e-mail and this interview has served to deepen my love for the gospel and Ethiopia’s orphans and to add to my enthusiasm for our Ethiopia orphan care and adoption programs. You can learn a little about the exciting kingdom work Anthony is doing in Ethiopia here and here.

As you will see from the pictures below, Anthony and Amber are also adoptive parents of a multi-ethnic family. You’ll enjoy reading about their two adoptions.

1. Anthony, tell us a little about your family and what you do.

I have been married to Amber for six and a half years, and we have two children. Our first child Ellie, who will be four in December, is adopted from Ethiopia. We adopted Ellie when she was six-months old. Our newest addition is our son Isaac, whom we adopted in October 2007 domestically at the age of three months.

We serve as missionaries in Addis Ababa, Ethiopia working there to theologically train local pastors and church planters. We have worked on a short-term basis for over seven years, and moved to Addis just over two years ago.

2. Why did you choose to adopt trans-ethnically in general and from Ethiopia in particular?The decision to adopt came to fruition as a result of a strong desire to do so within both Amber and I. For more than a dozen years, I have been close with a family who had previously adopted (18 and 11 years ago) and seeing this family and what God had done and is doing within their family increased my desire to pursue a family via this means. For us, adoption is a God ordained method of growing a family. Not only that, but we are also convinced that adoption is included in the scriptural commands that are part of the gospel, like “love your neighbor” and “do justice, love kindness, and walk humbly with God”. The trans-ethnic decision merely grew out of a love for Ethiopia, having been there, as well as being acquainted with the need that exists there. We want our lives to be gospel-focused, and that particularly in Ethiopia. So, adopting from Ethiopia makes that even more of a reality for us.

Round two for us was somewhat different. We basically received a phone call and email about a need for a 3-month old baby boy and five weeks later God gave him to us!

3. What kind of responses have you received from extended family and friends about your decision to adopt trans-racially? 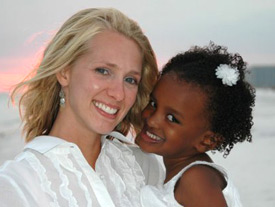 Our family and friends could not be more excited. Actually, without their unceasing support it would not be possible for us to have adopted either Ellie or Isaac. The children are part of our family and they are accepted to the same degree that Amber and I are among our families. However, it did not begin that way. There was some animosity leading up to the first adoption and even shortly after Ellie’s arrival from a couple of family members, but it only took them actually seeing her and how everyone around her was so accepting of the idea to come around completely The same family members were supportive of the second adoption.

4. Can you tell us about Ethiopia’s orphan situation and what you think the church can do to serve Ethiopia and its orphans?

The situation in Ethiopia is astounding concerning its orphans. Five percent of the population is made up of orphans and that is expected to drastically increase in the near future. Over one-half of the population in Ethiopia is under the age of sixteen, and in just a couple of years it is projected that one-half of all children under ten years old will be orphans. These digits are staggering to say the least, but disease among the younger middle age is a rampant reality with no genuine hope in sight.

The opportunity that the church has to serve Ethiopia is multi-fold for sure, but I will just mention a couple of them. First, the chance to influence and affect Ethiopia with the gospel through adoption and caring for these children by bringing them in and raising them is becoming increasingly simple. And second, the orphan dilemma in Ethiopia is a result of the obvious lack of gospel influence in Ethiopia. So, to help curb the situation, we can take and/or send the biblical gospel there.

5. Would you encourage others who are pursuing trans-racial adoption to seriously consider adopting a child from Ethiopia?
Without a doubt, I would enthusiastically encourage anyone pursuing adoption to seriously consider Ethiopia. This strong urging is a result not just of the immense need, but is also due to the great love that I have for the Ethiopians and God’s glory among them. Though adopting from Ethiopia is not the only way, I do think it should be honestly considered by those pursuing trans-ethnic adoption. Some practical reasons to consider an Ethiopian child include, but are not limited to, the ease of the current process and the cost in comparison to most other countries.