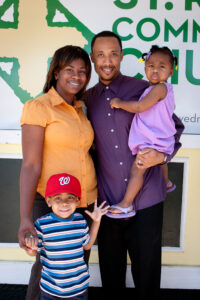 We are in the midst of a series of interviews that seek to address adoption-related issues from a theological perspective. I am interviewing theologians, authors, adoptive parents, and a few adult adoptees about a number of adoption issues. Carolina Hope is committed to helping Christians think theologically about all things adoption. We believe that this interview series will help us accomplish this.

Today’s interview is our second one dealing with the issue of transracial adoption. Our guest is J.B. Watkins, Senior Pastor of St. Roch Community Church, a multi-cultural congregation called to serve the St. Roch and St. Claude neighborhoods of New Orleans. Desire Street Ministries planted St. Roch Community Church in an effort “to replicate its model of incarnational ministry and indigenous leadership development.” Danny Wuerffel, Executive Director of Desire Street Ministries, writes: “Desire Street Ministries exists—to revitalize impoverished urban neighborhoods through spiritual and community development. As a part of that mission, we consciously try to combat injustice and to share God’s heart for the poor.” St. Roch Community Church was launched in January 2007 as a result of this mission. It is a community of believers that is committed to preaching the gospel in word and deed, discipling children, youth, and adults, and addressing the felt needs of these New Orleans’ urban communities.

1. J.B., tell us a little about yourself and your ministry in New Orleans.

My name is J.B. Watkins and I am the Pastor of the St. Roch Community Church plant. Having been planted by Desire Street Ministries, we are a diverse body of believers affiliated with the Presbyterian Church in America and located in the inner-city of New Orleans, Louisiana. St. Roch, as a core group, began meeting in February of 2007 for bible study with but a handful of people and plenty of children. Currently on average, we have about 20 adults and depending on the location, anywhere from 25-35 children attending our Sunday evening bible studies. As for myself, I recently joined St. Roch as the Pastor in August of 2007 by way of a previous ministry in Memphis TN. As a church, it is our desire to see the whole of the community by which we reside (St. Roch/ St. Claude), become transformed in every sphere of its existence by the gospel of Jesus Christ.

2. My wife and I adopted two black boys as infants. They are now five and three. How important do you think it is for white parents to connect their black children to the black community and their black heritage?

I believe that it is very important. As a child with black skin, he will somehow or another always be identified with those of the same skin color. As such, the opportunity should be afforded them to connect with the black community as well as their black heritage. This can have a very positive affect upon the child in that he will be enriched with the different experiences of being raised by white parents and yet having full access and awareness of his black identity. Not only would this prove beneficial for the children but for the different-race parents as well.

3. How can different-race parents help their adopted children deal with racism?

For one, I believe that it is very important to be truthful and upfront about it. The sad fact is that racism, though not as open or blatant as times past, is still very much so alive. This need not be hidden nor denied but carefully and sincerely explained.

But not only is it important to be truthful and upfront about racism, I also believe that this issue must be handled and addressed from a biblical perspective. I believe that the children should from an early age be made aware of the beautiful diversity of God’s creation, which includes ethnical backgrounds. And any attempt to discredit or deny such beauty must be attributed to the devastating effects of sin. In addition to such, different-race parents must help their adopted children to see and appreciate the culmination of the gospel—namely that day in which all types of people will equally, as it pertains to race, stand before the throne of the Lamb giving praise and thanks for what he has done. And not only will this be the case, it should likewise be reflected here and now.

4. Many different-race children struggle with the differences they discover between themselves and their different-race parents. How might the gospel influence how parents address this struggle?

As a biracial child with predominantly African-American features (skin complexion, hair, etc.), I have often struggled with such differences myself—my mother being biracial with predominantly Euro-American features and my father being African-American). One way in which the gospel may influence how parents address this struggle is to help their children to see that the gospel allows for certain differences and likewise celebrates them. It is an all-too common error to associate the reality of differences with problems. And this need not always be the case. Different-race children must be helped to understand that the gospel allows for differences and as such to be different in many aspects by all means ok.

6. Some black pro-lifers began a website that addresses the impact of abortion upon the African American community (blackgenocide.org). Here’s what their website’s intro page says: “Although black women constitute only 6% of the population, they comprise 36% of the abortion industry’s clientèle. The leading abortion providers have chosen to exploit blacks by locating 94% of their abortuaries in urban neighborhoods with high black populations.” Are you aware of any efforts within the black community to establish crisis pregnancy centers in urban areas and/or to encourage Christians to provide homes for these African American children?

7. How receptive is the black community to transracial adoption in general? What are some areas of concern that they might have and how does the gospel address those concerns?

I believe that the answer to the first part of this question depends upon what sector of the black community one is considering. The reality is that there is a major gulf between the African-American community of the middle class and the African-American community of poor urban areas. Nevertheless, I believe in general, that the black community taken as a whole is cautiously receptive—if not in action, in mindset. As to the concerns, I believe that they do not differ much from that of the white community. For it would be equally as hard, if not harder, depending on who you ask (in light of the history of this country), for black parents to raise white children. What will whites think about black parents raising white children? What will other blacks think about black parents raising white children? How can black parents keep their adopted white children connected to the white community and identity? These are questions that will naturally arise in transracial adoption.

The answer to such concerns of the black community regarding this issue is basically the same as that which is and should be given the white community. And that is that the gospel of Jesus Christ is for all ethnic backgrounds to celebrate and to also share with one another.