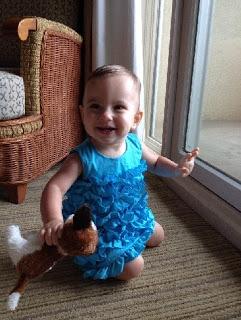 I heard about embryo adoption for the first time many years ago, on James Dobson’s Focus on the Family broadcast on embryo adoption. I wasn’t married at the time, but I had childhood cancer and had undergone radiation on my abdominal area. Some of my doctors said to not worry about it, but another doctor said it could be an issue.

After my husband and I got married in 2006, we didn’t waste any time trying to conceive, as we were both in our 30’s. But we knew right away we were going to have problems getting pregnant. We discovered our chances of getting pregnant were very low—only about a 1% chance. I started thinking about the Snowflakes Embryo Adoption Program again.

We were matched (with a placing family) in March 2010, and just a couple of months later, in June, our embryos were shipped to our doctor’s office in Dallas. Shortly after that, we went in to prep for the transfer. It took us three rounds before my uterus would respond the way they wanted it to. The doctor thought that only four of our nine embryos were viable, but that we had a good chance of getting pregnant with the four that seemed the strongest. We decided to thaw the best two and weakest three, and only one survived the thaw. Our doctors said we could transfer the one or thaw the rest, but we felt at peace with just transferring the one that survived. And that’s what we did. Everything went beautifully, I got pregnant, and that was Elisabeth.

Now Elisabeth is fourteen months old. I don’t think of her as not genetically related to us. Having given birth to her, I don’t even think about that. I don’t think about there being any separation or difference. We are in an open adoption with Elisabeth’s placing parents. We plan to be very open with Elisabeth about her placing family. They are very happy for us, very interested and excited. They are not overbearing at all, but they do stay in touch by email and phone every month or two. They also sent her a big package of things when she was first born – clothes, toys and some other sweet things. They also sent a gold cross for her when she gets a bit older. It’s been just perfect.  We all needed help, us with having children and them with being able to place their embryos with a family. For us that was the perfect match.