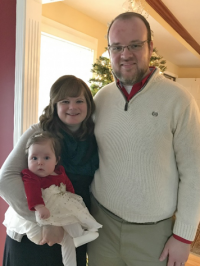 Allison and Brent met at their church, and two years later were married! Then baby-fever hit. The original plan to wait a year to start a family changed quickly. Their attempts at pregnancy success in that first year culminated in the sad diagnosis of infertility. That was a huge change in the plan! Thankfully, Allison and Brent were sure that God’s plans for them weren’t changed! They were exactly where He planned for them to be.

They had already discussed adoption even before they were married. They knew there were other paths to having children. One of Allison’s co-workers learned about Allison and Brent’s interest in adoption and told her about embryo adoption. Allison went home that night, excited to tell Brent about this unique adoption alternative. As they learned more, they prayed and they talked it over with trusted family and friends. They were convinced this was the right adoption choice for them and applied to the Snowflakes Embryo Adoption Program.

The adoption process started in March and ended in early autumn. They were matched with a family who gifted them with seven embryos – they were thrilled to adopt them!

The first frozen embryo transfer occurred in December with no resulting pregnancy. They had a second FET in April, but again, no pregnancy. With just three embryos remaining they scheduled their third transfer in June, thawing two of the embryos and successfully transferring one. The test was positive!  They were going to have a baby in February!

But, the joy expected in February ended in a miscarriage at seven weeks. Heartbroken and devastated at their loss they continued to trust in God’s faithfulness.

In late November, they scheduled a FET, using their last remaining embryo. The embryologist was uncertain this embryo would even survive the thawing process. Their affectionately named “Bond Baby” (named after Brent’s love for 007) proved them all wrong! Two weeks before Christmas they received the news they were pregnant and due in August.

Their sweet and precious miracle daughter, Adleigh, was born on August 1. What joy and wonder she has brought into their lives – the best gift EVER! They are forever thankful to God and to the donor family for the gift of her life!