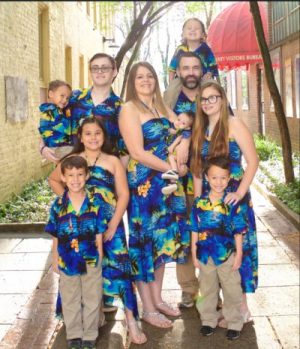 I first heard about embryo adoption after my mother heard about it on a radio broadcast. It was 1997-1998 and the first embryo adoption program in the world, Snowflakes®, was in its infancy. Mom told me about what she had heard, and we hadn’t been married very long. I hadn’t even finished my degree. We hadn’t even determined to begin building our family – yet. Nevertheless, the idea of embryo adoption immediately captured my heart. I thought, “It’s incredible there are all these embryos in frozen storage, waiting, needing someone to give them a chance to be born.”

Being a mother, being a parent with Jeremy, was always part of our married future. In fact, I was 8 months pregnant with our biological son, Micah, when I crossed the stage to accept my doctorate in veterinary medicine. I loved being pregnant! I loved being a mom and was eager to have another baby shortly after Micah’s birth. Our daughter, Faith, had many health issues her first three years of life, some of them likely genetic, so when we started thinking about growing our family further, we turned our minds to adoption.

My parents had adopted three of my siblings domestically and my brother adopted two children internationally. But as much as I wanted to adopt, I loved being pregnant. Embryo adoption allowed me to adopt and be pregnant at the same time. It also fit our strong pro-life ideals that life begins at conception and deserves respect and protection from the moment of fertilization. Jeremy took some time to research and understand this truly unique adoption choice called embryo adoption, but once he said “yes,” he was fully committed.

We officially applied to the program in May 2007. We requested to be matched with a placing family who might have remaining embryos that would potentially be more difficult to place. A family with nine remaining embryos determined to place their embryos with us! These were multi-ethnic embryos – Hispanic/Japanese/Caucasian – and we were overjoyed because we already lived in an extended family with ethnic diversity through adoption. Our adoption contracts were completed in February 2008.

In April, those nine lives were shipped from California to our clinic in Pennsylvania. We scheduled our first frozen embryo transfer. The first transfer of two precious embryos was June 26, 2008. The result was bittersweet: one of the embryos, Peace, went to be with the Lord, while the other embryo continued to thrive. We met our adopted daughter, Grace, in March 2009.

When we originally considered adoption, we were thinking one or two more kids in our family would be perfect. But, after the birth of our daughter Grace, we knew our hearts belonged to all seven of the remaining embryos we adopted and we wanted to keep all of the siblings together. We determined to schedule a frozen embryo transfer of two embryos every 2.5 years until all the embryos were given the opportunity to become all that God created them to be.

Our second transfer, in March 2011, resulted in the birth of our twin boys, Isaac and Isaiah. In December 2013, we had our third transfer and in August 2014 we had our second set of twin boys, Jeremiah and Josiah – who are doppelgängers of the first set of twins! In August 2016, our hearts were broken when we lost our two babies, Charity and Trinity, during our fourth transfer. Our one remaining embryo had been waiting for 13 years to have his birthday. In May 2017, we welcomed Ezekiel into our family. His name means ‘God strengthens’ because God gave him the strength to be here after the many years of waiting.

Our family is abundantly blessed. Although not in our original plan to be such a large family, we are delighted and filled with joy as we parent each of our children. We appreciate each unique person who is a part of our clan and how we work together to accomplish life as a family. The fact that we have two sets of twins often starts conversation about embryo adoption wherever we go and my six Snowflakes are evidence that each embryo is a unique, genetic individual worthy of dignity and every chance at a real life.