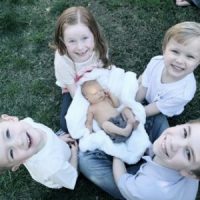 JV and Cathy Kennedy were married young and had big dreams of building a large family. When they had a miscarriage on their first attempt they were heartbroken. Then Christian was born followed by three more losses before Cambria arrived. Between the births of their son and daughter, the couple pursued testing, but despite visiting every fertility doctor in their area, they found no answers.

After suffering two more miscarriages it became clear the trouble was something genetic and the couple made the decision to adopt.

The question made them pause and consider their options again. JV explains, “We were afraid it was something that wasn’t safe for us – or not as safe for us as domestic adoption. After having so many losses we really just wanted to take the route that seemed the most guaranteed to bring us a baby.”

Cathy went to the doctor for yet another consultation. She came home with no new answers, but with a lightbulb, that embryo adoption seemed like a really good option.

After investigating and having their concerns alleviated they pursued embryo adoption with cautious elation. “When we thought about embryo adoption more seriously, we realized it was a way we could experience pregnancy. We got the blessing of adoption as well as feeling them move inside my body as they are growing. I would be able to nurse them after they were born. What could be better than that?”

Cathy got a referral to a doctor who not only had worked with Snowflakes before but was also willing to do a natural cycle with her. “There wouldn’t be the shots, which was a huge fear of mine.”

Three embryos were transferred to increase the couple’s chances of success. On the first ultrasound, they saw two heartbeats. In due time, along came Caden and Cooper, fraternal twin boys.

Not feeling their family was complete, the family had four more transfers and matched with another placing family before along came Cole. “He was the last of the seven embryos we were matched with to stick,” Cathy says. “He’s our healing boy”.

“People always ask us how we will bring it up – we will be honest with them from forever. I made this scrapbook which tells the story of their conception, of being matched with us, their whole journey from being embryos to being in our family.” The Kennedys often pull out their children’s story and read it to them. It’s a warm celebration. “We couldn’t imagine life without them.”