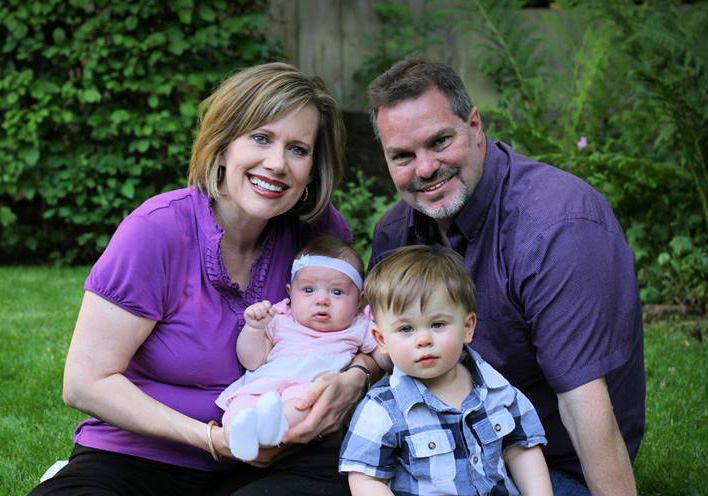 Dan and Kelli met on a Christian dating website in their early 40s. A year after marrying, the couple decided they should build their family. After eighteen months with no pregnancies, Kelli decided to visit a fertility doctor. Their dream seemed to be ebbing away after undergoing six months of blood tests and scans and getting no concrete answers. Finally, their worst fear was confirmed: Kelli’s eggs were determined to be no longer viable. She would not be able to conceive a genetic child.

Kelli and Dan were heartbroken and grieved tremendously over the news. When visiting her family doctor for a routine checkup, Kelli recounted her test results through tears. The doctor suggested she and Dan look into embryo adoption, explaining the process of being able to experience pregnancy with the adoptive child. Intrigued, Kelli told Dan about the concept and together they spent hours researching online. The more they researched, the more they saw this was the solution they had been looking for.

Kelli immediately began contacting embryo adoption programs. Unfortunately, because she was 45, many of the programs said they were not able to help her as she was past the age requirement. Determined, Kelli continued to seek more information. Finally, they contacted Snowflakes Embryo Adoption and was told she was not too old for the program. She immediately broke down in tears of joy.

Dan and Kelli applied with the Snowflakes program and were matched with a placing family: Chris and Rebecca. After reviewing their family profile, Dan and Kelli knew immediately this family was perfect for them. They had many similarities and had gone through infertility struggles as well. Wanting an open adoption for their children, the two couples decided to meet face to face. Over dinner, they discovered they had more in common than they initially realized. It was clear the two families were meant to be matched with one another. “It was like a joining of hearts,” remembers Kelli.

Once the adoption was complete, Dan and Kelli scheduled their first transfer date as soon as possible. They transferred 2 embryos and two weeks later they learned Kelli was pregnant! She gave birth to their adoptive son in December. 15 months later, the couple welcomed a daughter from the same adoptive embryos.

Kelli and Dan made a “life book” to help their children understand their unique story from an early age, which includes their other biological sisters and parents. Both families have visited each other’s homes, and in between visits they keep in contact over phone calls, email, Facebook, and Skype. Dan and Kelli (and Chris and Rebecca) believe this relationship is beneficial for all children involved. They want all the siblings to know each other and not be afraid to ask questions.

“My sister-in-law often jokes with us that we are the ‘21st-century couple’ since we met online and then had our kids through embryo adoption,” says Kelli. “While it has been unconventional for sure, there is no doubt that God has ‘made our steps firm’ and orchestrated the forming of our family.”