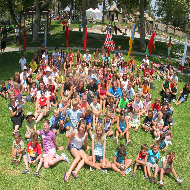 The following is one of our favorite stories from the Nightlight Summer Reunion Picnic. This year’s Summer Picnic is set for this Saturday, July 20th. For more information or to register, please visit the 2013 Summer Picnic Page of our website.

THE BLESSING OF ADOPTING OLDER CHILDREN
By Suzanne Murray

It was three years ago that Peter and I attended our fourth Nightlight picnic. Ever since joining the Nightlight family in 2000, we always made a point to attend the picnic and all other activities we could possibly participate in. Three years ago we were so proud of ourselves for listening to God’s calling not to pursue Snowflakes for our second adoption, but to pursue an international adoption.

We had just completed our homestudy and were waiting and praying for a referral of a child as young as possible (because we had done the big thing and given up the chance of being pregnant and having a newborn, so we wanted to at least make sure our referral was as young as possible), when we attended our 4th Nightlight picnic. Over the years we joyfully watched the visiting Russian children perform and thought to ourselves, “Oh, they are cute,” but never felt a calling to adopt any of them. It was at this picnic that we were socializing and trying to make new friends who might have adopted internationally, when someone announced that the visiting orphans would be performing on the stage. I suddenly could not breathe! We were standing right in front of the stage. I looked at Peter and told him we needed to move to the other side of the park immediately. He asked why, and I explained, “Because we are going to fall in love with one of these kids, and we are not adopting older. We are adopting a baby!” I took Peter’s hand and moved across as far as possible to the other side of the park. All the while, Peter was asking what was wrong with me, because for the past three years we had always watched the children perform. Why was this year different? We didn’t learn until 8 months later, when meeting our sweet daughters Anya and Galina, that Anya was one of the girls performing on tour during the summer picnic.

I have admittedly at times mourned the loss of not having them in our lives from birth. Missing a sweet infant, that doesn’t talk back or roll their eyes at you in disagreement. But this past summer, God spoke very clearly to my heart about all the wondrous blessings of adopting an older child, and I thought I would share a recent one. It was the last day of Vacation Bible School for Galina. They were having an 11:00 a.m. service, with the ending being the children in each grade singing a few songs. They told me Galina’s class was performing at 11:50 am. I was watching my sister’s three kids under the age of three, plus Mary who is four. There was no way I was going to make it. My plan was to put the babies in bed at 12 and head out for the end of VBS at 12:15 to pick up Galina and her cousin, leaving Anya, age 14, to babysit the sleeping ones. Yesterday, Galina asked me twice if I were going to see her sing and I had to tell her both times that I couldn’t.

When her dad arrived home from work, she asked him as well. There was such a look of disappointment when he said no, he couldn’t make it.

I arrived at church ready to pick up the girls. I went to her classroom and it was empty. I walked over to the church and our pastor was talking to the kids. Next thing I know Galina and her group went up and began singing….evidently they were running late and so I was able to see her perform. She was singing and doing the sign language to the song when she made eye contact with me and SMILED FROM EAR TO EAR! She couldn’t stop smiling the whole time and was singing her heart out…..tears began to flood my eyes and stream down my face. She looked so angelic and adorable up on stage…..I literally began thinking of the 14 childless summers prior to becoming a mom and just kept thanking Jesus for the wonderful gifts he has bestowed me with….and began realizing that with babies you have to wait years for the awesome milestones of your 8th grader bringing home a report card with a 3.67 GPA (even though she didn’t speak English two years ago), the awesome experience of buying your 14 year old a pretty dress for her first dance, watching your child play volleyball (or any other sport), and finally watching your child sing their heart out for Jesus and smile ear to ear because they see you….THEIR MOM! With babies, you wait forever for these moments. Adopting older I got to experience them sooner!

I love MY KIDS!