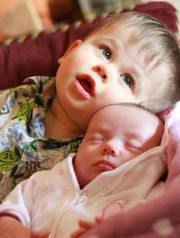 With the help of in vitro fertilization, Chris and Rebecca Henderson were able to have the children they always wanted. After more than a decade of heartbreak, Rebecca gave birth to twin daughters. Five years later, they naturally conceived another daughter. With their belief that life begins at conception, the couple paid a few hundred dollars each year to keep their remaining embryos frozen. After their third daughter was born, they decided to donate them to another couple struggling with infertility – Dan and Kelli Gassman.

In December 2012, the Gassmans had their son, Trevor, and the next July thawed three more embryos. Kelli became pregnant, and the couple welcomed their daughter, Aubrey. With their family complete, the Gassmans have returned the remaining embryos back to the Hendersons, who are close to matching the embryos with a new family.

Get The Full Story at USA Today