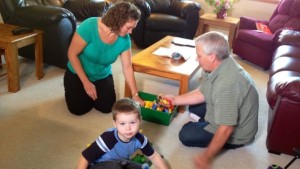 Nearly one in six prospective parents in Canada struggles with infertility, and most of them aren’t aware of a legal, if unusual option available.

Miriam and Mark Hordyk wanted to adopt children, but after three years of waiting, they gave up. Then they heard about the Snowflakes Embryo Adoption Program through Nightlight Christian Adoptions. They applied, and were matched with a couple that had donated nine embryos. Now they have a three-year-0ld son, Landon.

After finishing their family, Tom and Anabelle Peterson struggled with deciding what to do with their remaining embryos. After some research, the couple decided to donate their embryos for adoption and were matched with a couple in Ontario, Canada. The Peterson’s donation resulted in the birth of a healthy baby boy.

Get The Full Story at CBC News Manitoba