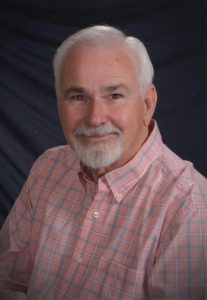 A visionary is a leader of excellence who sees what others do not see, who achieves for now and plans for the future, who positively impacts different generations and raises up other visionaries.

This month we are honored to highlight Nightlight Christian Adoptions (Nightlight) founder and leader, Ron Stoddart.  Mr. Stoddart has been instrumental in the development and expansion of Nightlight’s adoption services for over thirty years.  Having initially established a successful domestic adoption law practice during his career, it was in the 1980’s and 1990’s when there became a marked decline in the number of birthparents choosing to make an adoption plan.  This was in part due to the number of women choosing abortion as an option to an unplanned pregnancy, as well as a societal decrease in the stigma attached to single parenting.  During this shift, it was Mr. Stoddart who had a vision and initiative to expand adoption services on a global front to include international adoptions. So, in 1992 he began facilitating adoptions from the former Soviet Union.  During this period Mr. Stoddart traveled to Russia several times a year visiting orphanages and children in need. As a result of his efforts and passion over 1000 children in need of forever families were placed in US adoptive homes during the 1990’s.  In 1994, he merged his law practice and international foundation with our organization and became the Executive Director of CAFS (Christian Adoption and Family Services), whose name later changed to Nightlight Christian Adoptions.

In his efforts to continue the expansion of international adoptions, Mr. Stoddart created a separate non-profit in 2009 that was established to organize and fund orphan host tours.  Initially serving children in Russia, the hosting program was later extended to other countries.  The first hosting tour was in 1995 and orphan hosting programs have continued into the present day with other US based adoption agencies and developing countries participating in a hosting program.  The success of the hosting program further extended into finding permanency for many children who were later adopted by their host family.

In 1997, Mr. Stoddart pondered the question “What do people do with their remaining embryos from IVF?  Is it possible that couples would donate them for adoption?”  He was intent on extending adoption best practice to embryo adoptions to include ongoing openness, a home study evaluation, and social work matching to ensure the best interests of the child were being served.  In 1998 Nightlight became the country’s first licensed adoption agency to offer embryo adoptions. In 2007 the embryo adoption program was branded Snowflakes® and today is one of Nightlight’s most vital and popular programs offering childless couples another option to grow their families.

During his tenure as the Executive Director of Nightlight, Mr. Stoddart led the merger of several other non-profit adoption agencies with Nightlight.  These mergers allowed Nightlight to further expand services in additional states, as well as the ability to offer additional intercountry programs to clients.

In 2012 there continued to be a noted decline in international adoptions.  This same year Russia closed their international adoption program, forcing Nightlight to again plan for a future of diverse services.  Mr. Stoddart retired as the Executive Director of Nightlight in 2013 and joined Nightlight’s Board of Directors.  It was during this time the Board decided to build a foster care services program and in 2013 Nightlight’s Colorado office opened its foster care program.  Today Nightlight has foster care programs in Colorado, California, Oklahoma, Kentucky, Georgia and South Carolina with other Nightlight offices following suit in planning and applying with local public child welfare agencies to offer foster care services in their communities.

Today, Mr. Stoddart continues to serve on Nightlight’s Board of Directors.  Over his career he has received many accolades for his continuous work in serving vulnerable children.   He has participated as a guest speaker on broadcasts of “Focus on the Family” and “For Faith and Family” and has served as a spokesman for numerous radio, television, newspapers and magazines for his pioneering work in exploring the ethics of embryo adoption and embryonic stem cell research.  He has developed and presented seminars on “Father – Daughter Relationships” and wrote and published the booklet “Tough Love in Action” as an aid in adoptions.

In acknowledgement of a lifetime of work dedicated to serving families and children around the world, Nightlight salutes the tireless efforts of Mr. Ron Stoddart and his visionary leadership that has led our agency to where we are today.

Of course, the type of adoption you are interested in pursuing factors into your choice.  The good news is that Nightlight offers all types of adoption services: domestic infant, international (20+ nations), Snowflakes Embryo Adoption (we pioneered it!) and foster care/adoption in several of our states.

But, aside from the services we offer, why Nightlight? Recently our executive management team reviewed and discussed the core values of our agency. The people who work at Nightlight are FOR YOU.  They want you to be successful in your adoption journey.  They want each child to get placed into the best family for that child.  We are child-centric.

Here is a list of the core values we hold at Nightlight.  Read through it. Is this the type of adoption agency you would like to help you?

Nightlight has been serving adopting families before, during and after their adoptions for more than 60 years.  Our experienced and compassionate staff are available to answer your questions and help you choose the adoption program that is best for you. 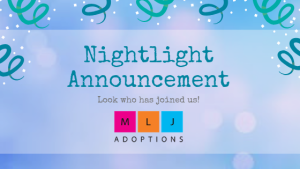 In order to offer clients a wider variety of services and to increase our geographic service area, as of August 1, 2018, Nightlight has entered into an affiliation agreement with MLJ Adoptions, Inc. based in Indianapolis, Indiana.  A full merger will occur on January 1, 2019.  Many of our Nightlight staff have had the opportunity to work with MLJ in different capacities through the years, and it is because of that experience that we are thrilled to join efforts to serve families.  MLJ is a leader in the international adoption field. In addition to their many international programs, MLJ is also known for thinking outside the box to serve more families.   To learn more about MLJ, please click  this link to visit MLJ’s website.

MLJ has a strong program in Ukraine, Bulgaria, Samoa, and several other countries.  As part of this affiliation agreement, MLJ clients are welcome to consider Nightlight programs, such as embryo, domestic, and foster adoption. 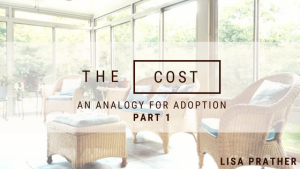 Last weekend I visited the local Home and Garden Show and I was so inspired by the patio rooms displayed that I made an appointment for a salesman to visit my home. After talking with him about my desires for the room, he crunched the numbers. I had figured the room would cost around $25,000. After he crunched the numbers, the first price was $81,000! He said, “I’m sure that is a bit more than you were expecting.” Of course, after all the deals and discounts, the final price was $57,000. Then we discussed some adjustments, such as, making the room smaller. Ultimately, we were able to get the price down to a meager $42,000. After he left, I ultimately decided that adding this room to my home is just not in the budget for this year. However, I started thinking about the cost of this room and the fact that no one would ever question the validity of this cost. The company has a good reputation, and the rooms are made from the highest quality materials.

Yet, when discussing the cost of adoption, many people question the validity of the cost. Many feel that adoption should be free or at the very least the cost should be minimal. In the mind of some, no one should be employed in the world of adoption and everyone should volunteer. Over the years, I’ve heard comments made that it is “free” to adopt through the state. This is simply not true. While the adoptive family does not write a check to the local Department of Human Services, the employees are paid and the cost of the process is covered by tax dollars. If you look at statistics regarding the average cost to care for a child in foster care annually, you will find that private adoption is actually quite inexpensive.

In order to build this room onto my home, I would need to pay for the following:

In addition, the company doing the work would need to cover the cost of:

How does this compare to adoption? Stayed tuned and read more next week!