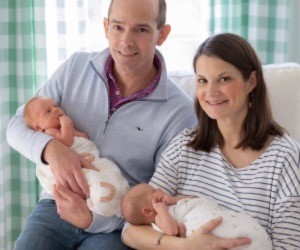 We have always dreamed of having children. Our journey to start a family began 10 years ago. Like many couples who experience infertility, we began our journey thinking that we would conceive quickly.

Unfortunately, that turned out not to be the case.

After a year of trying unsuccessfully on our own, our attention turned to fertility assistance. Following four unsuccessful rounds of Clomid and then four unsuccessful IUIs, we shifted our focus to IVF. We went through six rounds of IVF with specialists all over the country, which resulted in only one transfer and no pregnancy. The IVF rounds showed that our embryos would arrest at Day 3; thus, we were unable to create viable embryos.

We were diagnosed with an egg quality issue.  We decided to explore other options. We never obtained a peace about egg donation or traditional adoption. This left us confused, as we believed these were our only options until a friend shared the story of a couple who adopted embryos, which resulted in the birth of their daughter. This intrigued us and the more we learned and prayed about embryo adoption, the more confident we became that this was to be our journey. Further, the Lord had planted in Mary Leah’s heart early in our journey during a time of prayer that she would become pregnant.

In faith, Mary Leah held onto to this promise, yet we did not know how it would happen. Embryo adoption would provide us the opportunity to adopt, give life to precious embryos, and provide a loving family to children, while at the same time give Mary Leah an opportunity to carry the children and experience the joys of pregnancy.

We initially adopted four embryos from a placing family. Our first embryo transfer did not result in a pregnancy. Our second transfer resulted in us experiencing our first positive pregnancy test. The six-week ultrasound was amazing as we were able to see the baby and the heartbeat. Unfortunately, there was no heartbeat when we went back for the eight-week ultrasound. While we were deeply saddened, we were not discouraged. The weeks we had with that baby confirmed our desires to be parents and provided us more hope that those desires would be fulfilled. It was truly amazing that we had given the four embryos we adopted a chance a life, and decided to adopt additional embryos as we continued our efforts to start a family.

We then adopted five embryos and transferred two of them in April 2022. The transfer resulted in a pregnancy! We were thrilled to learn that we were expecting twins. After ten years of trying to start a family, on December 23, 2022 our children, Dalton and Mary Elizabeth, were born.

While our journey has not been the one we originally planned, it has truly been a blessing. We have grown closer to each other and the Lord in our season of waiting. Moreover, because of our experience, we have been able to launch a non-profit that offers community groups for women walking through infertility, miscarriage and infant loss, a couples’ community group, grief counseling for struggling couples, as well as grants for fertility treatments. The Lord has definitely used our pain for a good purpose. In looking back on our journey, we can see the Lord’s hand on each step even if we did not realize it at the time. We now know His plan was for us to start a family through embryo adoption and we are so grateful for Snowflakes.

Mary Elizabeth Miller also carries family names. Mary appears in each generation on Mary Leah’s side of the family. It was also important to Mary Leah that she go by a double name as Mary Leah and her mother go by a Mary double name. Elizabeth is a generational name on Rodney’s side of the family and his grandmother’s middle name. We also found her name fitting as the Lord led Mary Leah to Luke Chapter 1 early in our journey and the story of Elizabeth and Zechariah. The verse that stuck out to Mary Leah appears when Mary visits Elizabeth who is pregnant with John the Baptist. The verse is Luke 1:45 “Blessed is she who has believed the Lord would fulfill His promises to her.” Mary Leah has held onto this verse in faith for years, believing that she would become pregnant. As such, Mary Elizabeth’s name honors not only our families but also is a tribute to the verse that the Lord gave to Mary Leah.