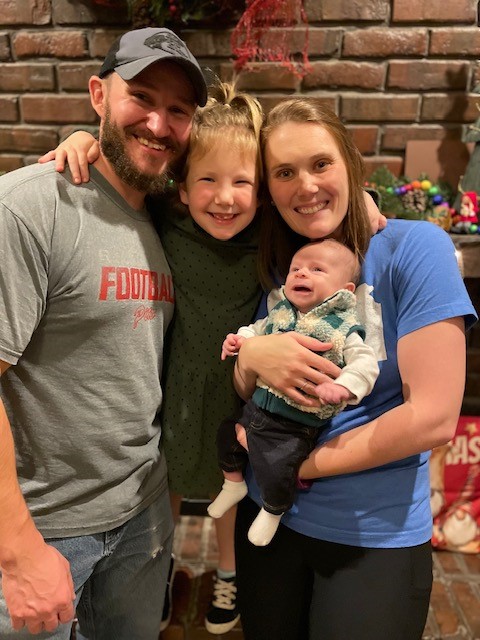 Dustin and I decided after our second wedding anniversary that we would begin trying to start our family. As many stories go, it didn’t happen right away… About a year later, we got a positive pregnancy test. We were so excited! Things progressed as normal until our 20-week appointment when we had our anatomy scan. Our doctor let us know that the radiologist was concerned with the pictures he had seen, as the baby was measuring far behind where he should be. We were immediately referred to a specialist and it was confirmed he was suffering from a type of skeletal dysplasia. We were told he would pass some time in the next 20 weeks of pregnancy, at birth, or shortly after birth. Our sweet little boy passed away shortly after we received the diagnosis.

We decided to pursue genetic testing after this and found out that I am a carrier of Duchenne Muscular Dystrophy. This meant if we were to get pregnant on our own again, any boys would have a 50% chance of being affected by the disease, and girls would have a 50% chance of being carriers (like me). To us, these were terrible odds at having our own children. It was suggested that we use IVF or an egg donor.

We got referred to a reproductive specialist and we began our second journey of trying to become parents. After the doctor discussed our situation with her embryologist and our genetic counselor, they realized that they were not able to test the embryos for the muscular dystrophy gene and that we should not do IVF with my eggs. Our next option was to use an egg donor, which we decided to pursue. After matching with a donor, she underwent an egg retrieval. We got nine eggs total and four resulting embryos. We had one of those embryos make it to the blastocyst stage. Our transfer was successful, but we then miscarried at 11 weeks; our baby had stopped growing around the 8-week mark. Again, we were heartbroken.

After this, we were not sure what our next steps would be. The egg donor route had cost us a large amount of money and we knew we could not financially afford that journey again. We explained this to our doctors, and they let us know about embryo adoption or donation. This intrigued us. We began working with a private agency near our home. We matched with a donor family who had one embryo and we decided to take a chance on this embryo. But our transfer was unsuccessful.

It was now December 2018 (about two years after we started our family-building journey), and we felt pregnancy would not be a possibility for us. So we decided to pursue traditional, private adoption. We met with attorneys to get our names out there for expectant mothers. We also started the certification process for foster-adoption. In 2019, we experienced a failed private adoption match in May, but shortly after had our first foster placement: a three-year-old girl named Brenley. Finally, after five years of trying to build our family, we officially adopted her in May 2021.

Our experience in the foster care world gave us some time to take a break from the fertility world and pregnancy loss. We decided we were ready to try embryo adoption again and discovered the Snowflakes Embryo Adoption Program. After speaking with them, we decided it was a great option for us. Snowflakes made the process so seamless. Without a doubt, through all our different avenues of family building, Snowflakes was the best! The process went quickly, and we were matched with an amazing placing family with six embryos. We were ecstatic! We began the medication preparation to get my body ready for the transfer, and in February 2021, we transferred one embryo.

In March (on my birthday!), we found out we were pregnant! We communicated with our placing family and kept them updated throughout our pregnancy. And in October 2021, we had an experience we never thought we would get: We welcomed our baby boy Arlo.

Dustin and I cannot begin to explain how grateful we are for our placing family and for the Snowflakes program. We never thought our life would take us on this wild journey to build our family, but we are forever thankful for embryo adoption and getting to experience carrying a child.