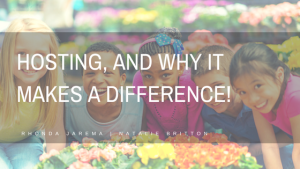 1995 was the first year Nightlight Christian Adoptions brought a group of children from a foreign orphanage for a hosting program. Children from a Russian orphanage had performed a wonderful program of traditional songs and dances for Ron Stoddart, Nightlight’s President, during his visit. He brought that group of children, ages 7-14, to California where they performed at churches, community parks and Disneyland. It was a success, as all of the children who came on that tour, ended up with permanent families. None of the families who hosted or saw the children perform and later adopted them, had any idea that they would be led to adopt after seeing and meeting those children. However, over the 23 years that Nightlight has sponsored tour programs, bringing well over 300 children to the US, the majority of those children have found permanent, forever families here in the US.

The intent was always to give these older children an opportunity to spend at least a few weeks in a loving, nurturing home with an intact, stable family. Even for those children who did not find their ‘forever family’, some by choice and some due to circumstances out of their control, they did have a wonderful vacation! Many of the children stay in touch with their host families long after the host experience. That is a reminder that the few weeks or month that a host child spends with the host family can be life-changing! My husband and I have hosted close to 70 children in our home over the past 23 years. It has been a wonderful experience for us and our children as we have been able to share our family with children from all over the world and learn more about their culture, while sharing ours. Our family is certainly a mixture of cultures as we adopted two of those hosted children, in addition to four others that were adopted internationally as ‘older children.’ It has been a reminder to our children about the children left behind, probably one of the reasons our children have always been such wonderful ambassadors, sharing about what it means to be adopted as an ‘older child.’

A few months ago, I was in a Starbucks waiting for my order. A young woman approached me and introduced herself. She had been on one of our earlier tours in the late 1990’s. I recognized her name and we hugged. She thanked me for bringing her on that tour! We reminisced and caught up on her life over the past 18 years. What an impact these hosting programs have had on the lives of the children and families!

Nightlight is partnering with Kidsave, a hosting organization, to bring children from orphanages in Colombia to stay with host families throughout the United States this summer. Ten children will be staying in Southern California, experiencing the ocean, bowling, museums, parks and likely Disneyland. When we ask the children towards the end of their stay about their most favorite part of their visit, we have received the same response consistently over the past 23 years. Over and over again, the children speak about the warmth and love showered on them by their host families. They certainly enjoy Disneyland and all the other activities, but it is the relationship they developed with the host family, over a period of a few weeks, that will last a lifetime! Nightlight has hosting programs during the summer and over the Christmas holiday season. Consider opening your home and heart to a child, hoping to spend some quality time with a family here in the US. Even if you are not able to host, there are other ways to participate, volunteering, donating funds towards their activities or the program itself. For those who host and volunteer, it is a wonderful opportunity to share your culture and learn about another culture, while giving a child the chance to possibly meet their forever family.