Location: The Tulsa Office of Nightlight Christian Adoptions is locate north of I44 and Lewis

Our office works with individuals and couples facing an unplanned pregnancy. We will help you learn about your options so you can make an informed decision about what is best for your baby and for you. 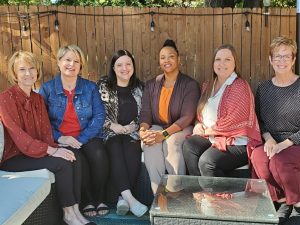 We were previously known as Heritage Family Services and are now pleased to be a part of the Nightlight Christian Adoptions family.

Click Here to read the history of our Oklahoma adoption agency office.

Heritage Family Services was created with the recognition that families are the most important heritage that each of us have. Our families help shape our personality and character and are designed by God to give us a foundation for life. While most families are healthy and give a positive heritage to their children, there are some families where children do not receive the positive beginning for life which they need. For some children, adoption can be a positive way to provide them with the nurturing and stable family they need. Heritage was founded not only as an adoption agency but as an agency that can perform a variety of services to help families.Debbie and Mike Nomura founded Heritage in October of 1996. As young people they had each had the clear sense that God had called them to a life of helping others. Educated as social workers, both Mike and Debbie have each spent their lives working in nonprofit social service agencies providing services to families and children. They each had gained decades of experience in various types of children’s services, including children’s home work, foster care, group home care, maternity home care, pregnancy counseling, child abuse prevention, as well as both domestic and international adoption. Both Mike and Debbie have a long history of leadership in state, regional, and national children’s organizations. They brought this wealth of commitment and experience to Heritage.

The Nomura’s founded Heritage in 1996 with a desire to build an outstanding, professional agency to provide adoption and other types of family services in Oklahoma. Right from the start, Heritage has been recognized by people all across the state as an outstanding adoption agency. During the years since Heritage was begun, the agency has not only helped to provide many adoptive placements but has been involved in the following activities:

Heritage Family Services, an affiliate of Nightlight Christian Adoptions, continues to be dedicated to its mission of Building Families & Changing Lives!