The Hinton Family wants to make sure that you are aware of the petition to the White House to save adoptions. If you haven’t already, please take time to sign it! Here’s how you can help!

Go to adoption.com or saveadoptions.org and you will see a link to sign the petition. This only takes a minute or so. REMEMBER, you must check your email to verify your signature so it will be accepted.

Also, please contact your U.S. Senators & U.S. Representative to put this on their radar. You can call, email or mail them, and you don’t have to be an expert the matter to contact them. You can let them know the following:

(1) You are concerned that inter-country adoption has declined over 80% since 2004.

(2) To increase the number of adoptions, as long as ethical, pro-adoption leadership is needed in the U.S. State Department’s Adoption Division in the Office of Children’s Issues.

(3) You oppose new fees and unreasonable rules being imposed on adoption service providers (ASP) and families by the U.S. State Department and their new accrediting entity, IAAME. These could cause some ASPs to close their doors.

Pictured is Ian and his family! He was adopted in 2014 from our Uganda Program. His mother says, “I hate to think of all the Ian’s worldwide in 5-10 years whose only alternative is inter-country adoption, and have no adoption service providers to advocate and facilitate adoptions for them, and no families to adopt them.”

Join Nightlight, the Hinton Family, and other adoption advocates in doing your part to advocate for international adoption and all the children whose prospects of having a loving family are in jeopardy. 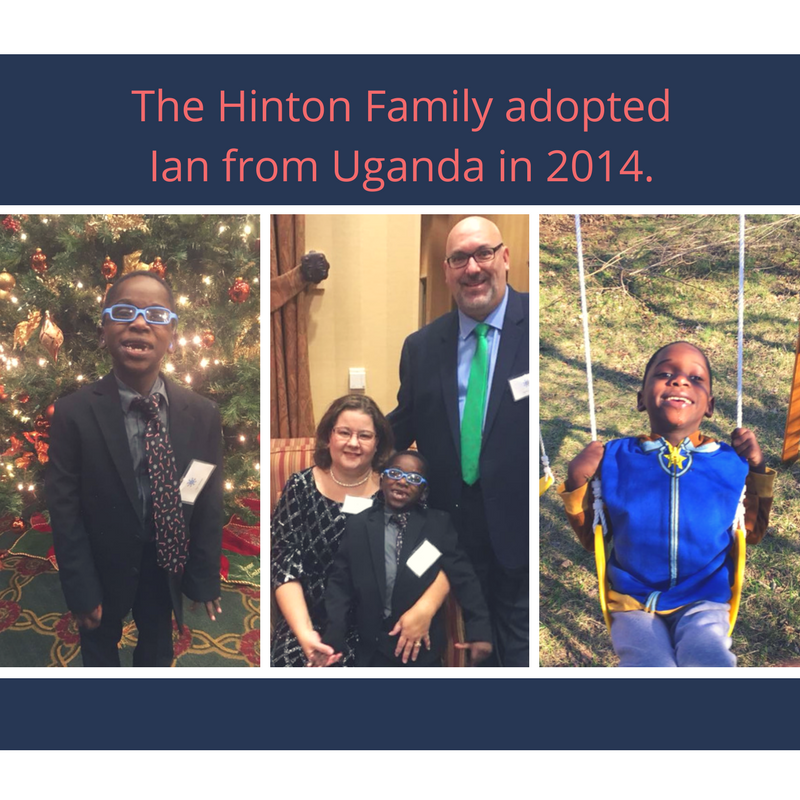 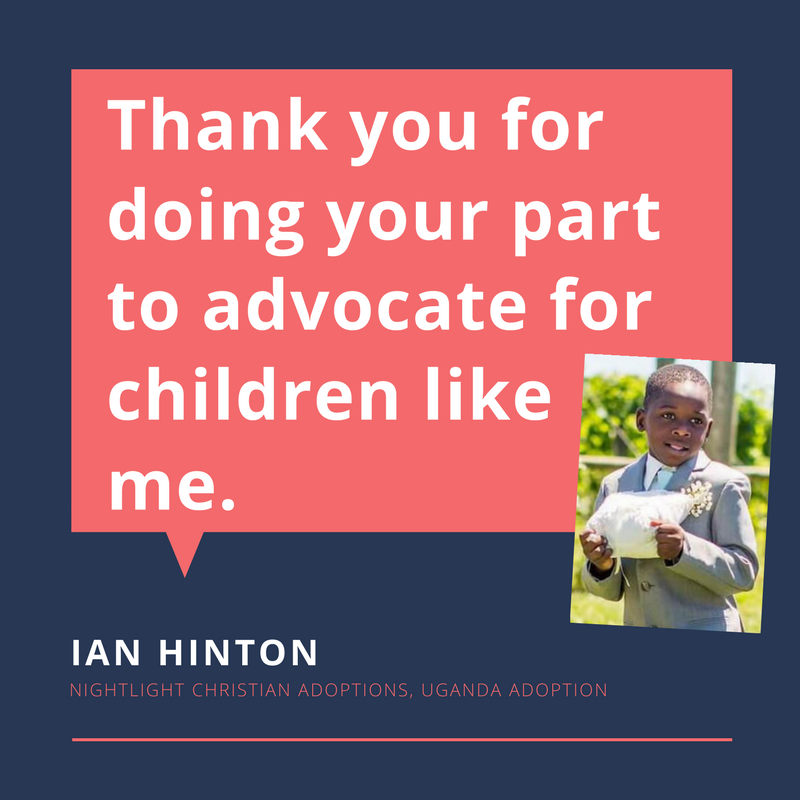 The words we use to describe adoption can have a profound impact on the way others view adopted children and families. It can also drastically impact a woman’s decision to place for adoption if she feels like she is not a “real” parent or feels negatively judged for “giving away” her baby. See below for some of the commonly misused terms in adoption and our suggestion for language that gives dignity and value to those connected to adoption.

A big story in the media recently focused on Olympian Simone Biles and her parents. A commentator incorrectly emphasized that Biles’ parents were “not” her parents because they were biologically her grandparents, not the parents who gave birth to her. Biles brilliantly responded to the commentator by saying, “I personally don’t have a comment. My parents are my parents and that’s it.” Regardless of any biological link, they are her parents and that is how we should view adoptive families.

Negative: Give away/Give up my child for adoption

Expectant mothers make an incredibly brave and loving decision when choosing adoption. The imagery of “giving away” suggests tossing aside. You can give away a sweater or a gift to someone with no regard for what happens to it but that is not the same thing as the life of a child. When an expectant mother decides to make an adoption plan, it truly is a plan, not a quick decision. She has considered the impact of this decision on herself, the birthfather, the child, other children she may have, and her family members and friends. She has taken time to find a trusted agency and met with a caseworker on many occasions to choose the best family for her child. She has felt the weight of grief and loss in her decision and still makes a selfless decision on what is truly best, not just what she is feeling.

People aren’t objects to be given away. Instead, adoption means making a customized plan to provide a forever family for a child. It is crucial that we speak about adoption in this way to convey the seriousness that women carry into making this decision for their child.

When used in this context, the term “parent” describes an active relationship. When a woman is making a decision between adoption and parenting, there is considerable thought given toward what her future would look like. You do not just “keep” a child, like an item put on a shelf. Parenting is an 18+ year choice full of action, responsibility, and daily care. It is important that an expectant mother understands this is a heavy choice, especially if she is not in a place at the time to accept the responsibility to be a parent.

While a pregnancy may not always have been planned, a child is always wanted.  He or she is wanted by the Lord that created them and the adoptive family that brought them into their home. The child is also very loved by his or her birthmother that made a loving plan for the child. This terminology devalues a child’s inherent worth and purpose on this earth and should never be used to describe them.

While it is important at times to distinguish when a child is biological or adopted or between the biological parents and the adopted parents of a child, that qualifier is not necessary in every situation. Parents do not think of their children in two separate categories – adopted versus biological. They are all their children, with the same rights, love, and care given to each equally.

When we speak about adoption, we should be careful to notice when we assign those adjectives and question in ourselves why we felt the need to make the distinction. You cannot read a news article about Connor or Isabella Cruise without seeing them described as the “adopted” children of Tom Cruise and Nicole Kidman. (This goes for virtually any news story about any family with adopted children.) Assigning this additional term onto a child’s story could make them feel ostracized from their family or send the message that children who have been adopted are lesser or different.

Changing the way we speak about adoption takes practice. This is an important lesson for us to learn as our words have the power to speak life over those touched by adoption and give them honor and value.