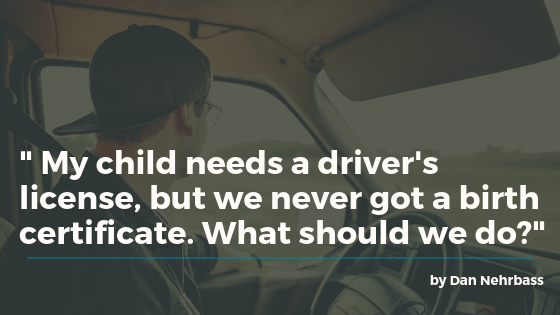 In California, only ONE document proving identity and birthdate is required.  Acceptable documents include:

There are several ways to obtaining the first 3 documents.  For most adoptees, the easiest form of ID to obtain is a passport.  And that’s the easiest document to provide for the driver’s license.  See here for California requirements.

For a passport, you will need a Certificate of Citizenship (mailed to you by USCIS after the adoption).  In addition, you can provide any ONE of the following

When your child was adopted, they were most likely also declared a citizen.  As a result, you would have received a certificate of citizenship in the mail.  If you did not save this document, you can contact USCIS and ask for a copy.  In addition, you can ask USCIS for copies of all the original documents provided for your adoption (your child’s original birth certificate, original passport).

Click here to apply for replacement certificate of citizenship

Thornton, Colorado –  Adams County Human Services and Nightlight Christian Adoptions have opened two homes designed to provide safety, comfort and security to children in foster care at a time when they are most vulnerable: immediately after being removed from their home. This new model of foster care, called Homes for Hope, is designed to provide temporary foster care for children in emergency situations within Adams County.

“We are absolutely thrilled to partner with Adams County for this project. We feel this is a perfect opportunity for children to have a safe haven – a warm smile and warm bed at a time when they are most vulnerable. It’s not enough for children to be safe, they must also feel safe,” Meaghan Nally, foster care program manager for Nightlight Christian Adoptions, said. “It is an absolutely new model, and we hope it can become a national model for emergency foster care.”

Two single-family homes have been renovated specifically for the program, accommodating eight to 10 children at a time. The program will allow the children to stay in their current school and community and ensure sibling sets are kept together. The program allows Adams County time to find suitable long-term treatment options.

Homes for Hope is the first of its kind in the country and could serve as a model to support children and families in all communities. Prioritization will be given to children from birth to 10 years old, but will serve children up to 18 years old to keep sibling sets together. One of the homes is set up to accommodate teen mothers.

Nightlight Christian Adoption is currently looking for interested families who would be willing to become foster parents and live in the homes full-time. “There is a shortage of foster parents across Colorado, and we need the community to provide the safety and care children and teens in Adams County need,” Nally said. “The ideal Homes for Hope foster parent is trauma-informed, has parenting experience, and is willing to move into one of the two homes. They are teachable, flexible and tenacious.”

Nightlight Christian Adoptions is a child placement agency located in Loveland, Colorado. The agency has provided foster care and adoption services since 1959 with licensed offices in nine states. Nightlight is currently recruiting for two families to move into the homes and families interested in becoming foster parents. To learn more, contact Meaghan Nally at mnally@nightlight.org, call (970)663-6799 or visit www.nightlight.org.

Is contact with placing families important in an embryo adoption match? How do you establish an open adoption? The Hendersons and Gassmans are embryo placing and adopting families who were matched through the Snowflakes Embryo Adoption Program. Listen as the two couples tell their open adoption story and the steps they purposefully made to build trust and love into their new family tree.

There is much fear and uncertainty regarding choosing an open adoption plan. These two families share with you their determination to overcome fear, resulting in great relationships for their children and for themselves.

There are few things more difficult emotionally than the inability to conceive a child.

For a couple in Parker, they had nearly given up hope of having a second baby after a reproductive health complication made it too difficult for them to conceive naturally.

That discouragement faded when Elizabeth and Marty Wilson learned about the Snowflakes Embryo Adoption program.

The program, established in 1997 by Nightlight Christian Adoptions, works to help couples donating their embryos find the right match.

“A couple in California had a few embryos left over after doing IVF and instead of discarding them, they chose to donate them,” Elizabeth said, “And we are so grateful we were a match.”

That embryo was kept frozen for nearly 18 years in a plastic tube before being matched with the couple.

The Wilson’s fertility doctors assured them that the frozen embryo had the same chance at life as a new embryo.

“Baby Marley has quite the birth story with a twist” Elizabeth said “She was FedEx’d to us!”

About 9 months after a successful embryo transfer, Elizabeth gave birth to Marley Jade on June 3, 2016.

In honor of Snowflake’s 20th Anniversary, Dr. James Dobson, Founder and President of “Family Talk” has written a compelling letter to the placing and adopting families of the Snowflakes Embryo Adoption Program. 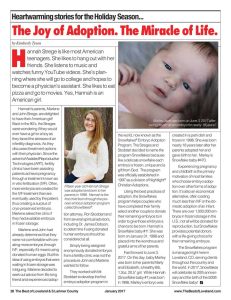 How important is embryo quality? There are a variety of methods used by medical professionals to grade frozen human embryos, projecting the likelihood of pregnancy success. However, many healthy children have been born from embryos given a poor quality rating by the medical community. Dr. Jeffrey Nelson of HRC Fertility helps us gain some understanding about this frequently misunderstood topic.

These videos were produced by Nightlight Christian Adoptions and supported by grant #1EAAPA151027 from the U.S. Department of Health and Human Services. Its contents are solely the responsibility of the authors and do not necessarily represent the official views of the Department.

Couples who have been unsuccessful at IVF will also not have success if they try to adopt an embryo. True or False? Parents don’t need to tell their children that they came from a donor conception. Adoption agencies charge exorbitant fees for embryo adoption services, the same cost as IVF. What is the truth? Let’s uncover the facts about these questions and more – ranging from the cost of an embryo adoption to the quality of embryos required by clinics assisting embryo adoptions around the country.

Is it possible that embryo adoption will be the solution that brings a sweet baby into your loving arms? Are you frustrated by the high cost of in vitro fertilization? Heartbroken by your IVF treatment failures? Embryo donation and adoption is a proven successful process allowing families with remaining embryos to donate them to another family that is desiring to experience pregnancy and childbirth. We invite you to come and learn more about this amazing adoption choice which has allowed over 10,000 babies to be born. This presentation was highlighted during the 2017 American Fertility Expo.

Nightlight Christian Adoptions is in the process of building some new pages to highlight our Snowflakes embryo adoption and donation processes. Stay tuned for easy to access information.